Another hot day - so I spent it at the bookstore, where it is air conditioned. Oh and I have the opportunity to see, feel, smell and taste some dick.

I was and wasn't disappointed, as always. Questionable men and their penises. The desire versus the quality. The need versus the want. The supply versus the demand. Why would this day be any different? It really wasn't.

As I either sat in a designated booth or walked around, there were plenty of dicks to suck, and I did quite a few, maybe six in all, but only obtained three loads. While 50% doesn't sound like "success", in a place like this, it kind of is.

The first guy was this kid. I'm guessing early 20s. Nice looking, great 6.5" with a fat head. You could tell if he opened his mouth, he might be a bit girly, but I wasn't there for conversation and luckily, neither was he.

We swapped sucking for a bit and some real creepy guy came by and really would not take either a hint or a direct comment. But that's the price we pay for having sex in public/open places. In reality you don't have the option to pretend you're on your own or that it is a private event. Eventually he moved on.

And eventually the kid got his nut on. It wasn't a big load by any means, but it made him shudder as he was deep in my mouth. I liked that. He left, I stuck around for a few before needing to see what else was out there.

I watched some HUGE dicked guy get sucked and kept moving on. He seemed attractive in his own way but I don't want people busting up my scenes so I wasn't gonna bust up his.

I sat around and eventually big-dicked guy found me. He left whatever he was doing. He fished out a big cock and I went to it. But it send shudders of deja vu up my spine.

As I wrapped my mouth around his dick, I could feel ridges underneath the puffy like flesh. I realized I had done this before with this guy but not to completion. The dick was too weird, almost like it was a penis implant or something - and maybe it is/was. It was too disconcerting to continue after a minute or so.

He did push my head onto a guy who was watching. It turned out it was the creepy guy from earlier. I ended up declining both guys and moved on. It was not my scene. ...and that is saying something!

I did stumble upon a guy who was in a booth, leaning way back in his chair watching a movie. His smallish cock was out but he had a gorgeous face and he was tan - all over, as the lack of tan line with his shorts pulled down proved beyond a doubt.

I saw a guy lurking through the shadows here and there and he seemed interesting. Bearish at least, bald and goateed a definite. Ink on his arm too. Sweet!

After a dozen or so attempts and misfires of getting into a booth without throngs of others around we were finally in two booths across from each other. We both showed wood and maybe since he won out with length and girth, I was the guy who had to come to his booth.

I got on my knees and really really went to town on his cock. Pushing 8.5 fat fat inches, he was great. Nice taste and feel and he had a dirty mouth. But he also liked sucking cock.

He went down on me and while he didn't look like he'd be that kind of guy, he was good at it. But I didn't want to unload, I wanted him to....and told him so.

I knew from my earlier sucking he was close and it did not take me long to get him to the brink. He popped in my mouth and it was a nice load, but nothing spectacular.

For good measure, he squeezed his shaft as he was pulling out of my mouth to leave a nice dollop of sperm in my beard below my lower lip. He smirked as he did it and I left it there - at least until I snapped a few pics for all of you to see. 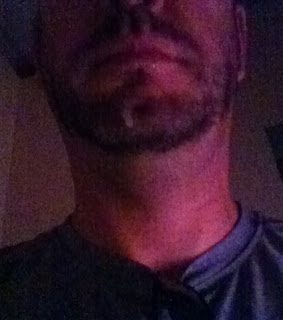 still in the booth - but not a great shot. 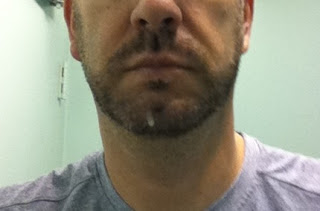 I was almost proud as I walked out of the booth and into a restroom for better lighting for this pic. I didn't care who saw the spooge on my chin.
I did hunt around a bit more and came across the guy with the possible implant dick, on his knees sucking a nice looking business casual man with a rock hard 9" dick. The feeder seemed so unresponsive to what the guy was doing it was amazing. No reaction at all about anything.

The sucker gestured to me to take a turn and the guy standing there did not object or make any kind of reaction. I worked on him for a good 10 minutes, again, with the same lack of anything the guy before me was encountering.

With no wavering in the stiffness of his member, it led me to believe the guy was loaded up on Viagra or something similar. Blood flow to that kind of sized dick with zero enthusiasm of what is going on around you makes me think he used assistance.

I have no problem with that, but I had three loads in my belly and this guy was in it for the long long long haul. I was having a hard time getting engaged when he wasn't at all.

I opted to move on - looked around for a bit and then just left for the day. It had still been productive.
Posted by BikeGuy at 10:13 AM 3 comments:

Is there anything hotter than a cocksucker on his knees surrounded by dick? One could argue the point: No!

Yet there I was on my knees in a bookstore booth with one man in front of me, one to my left and one to my right.

Let me start from the beginning. After a long long work day, I was nearby the iffy bookstore where I plunk down $10 for the “privilege” of having to navigate through sparse amounts of men and even sparser decent ones – yet I continue to do it. It sucks being an addict.

I picked a booth and sat in it (remember, this place has no doors on their booths). A decent looking guy took the one across from me. When my eyes adjusted to the light, I saw how decent. That would be ‘very’.

The guy didn’t sit, but stood just out of the door view but I could see the head and first 2” of his dick. It was nice too. He never peeked into my booth and I got tired of hoping he would. I stood up and walked out of mine and into his doorway. He didn’t signal me in, but he didn’t tell me to go. I placed my hand his THICK piece of meat and he let me. It was my invitation.

This guy never looked down or paid me any mind. Fine with me. Let him get off on his straight bangin’ movie – and if he does it in my mouth, so be it.

I won’t lie, blowing him was tiring. He was rock rock rock hard and wasn’t in any hurry to get off. I like a challenge though, even if my jaw was looking to tire out or be dislocated.

As I was sucking I heard a noise outside the booth. I look out and in the little corridor, there is a guy sucking another guy - but both are still watching me suck this big guy. Neither guy was awful, so I didn't care if they watched, neither did the feeder.

As these things happen, with no indication of telling them to leave, the two pushed the envelope and entered the booth. Me on my knees - the original guy in front of me and now one on each side of me. Both the new guys had decent dicks...7" or so. The one on my right was thicker, but it was the one on my left who had all the initiative of the group.

I hate to say it but I had to use my hand on this guy. He was big. He was super thick. He was gonna need some extra attention that even an experienced cocksucker would have trouble with. But I think having two other guys there didn't hurt his mindset.

He buckled up and ambled out, Mr. Ballcap took my head in both his hands and directed me back to him. The same sigh, the same eyes rolling back and head leaning back. But this time he kept his hands on my head and directed my movements. He was into it. And while he was a bit rough around the edges in terms of appearance, he had the right moves and attitude. His grip tightened and he unleashed quite a load into my mouth - nice and sweet too.

With no acknowledgement of what we had just done, he zipped up and walked out.

That left me with the other guy, which at this time I realized he had NO PANTS ON. Where they were, I have no idea. The reason he wasn't into me sucking him that much was that he wanted to suck me. That's not why I dropped $10 at this place. He did tell me he had gotten Mr. Ballcap off earlier that afternoon, so I got load #2 and it was a good one.

I did run into a guy who was ok and he joined me in a booth. Nicely built but with an ugly ass bandanna wrapped around his head like Olivia Newton-John might have done in 1981. Turns out he wanted to suck me.

I let him and he was just not that good. I was not staying hard and he was almost too much enthusiasm to have any technical expertise. He also mentioned he didn't swallow - so what was the point?

I did get him to let me suck him for a bit and when I was down on him, who would show up at the door but Mr. Ballcap. Once again, he entered on his own and directed my mouth to his dick.

I ended up going back and forth between the two and it turns out they just started making out. Really into each other. I got both of their cockheads into my mouth, but it was hard to keep them there with all their kissing and writhing.

Mr. Bandanna was the first to get his nut on....or off. He put it in my mouth and I gladly did something he wouldn't do - swallow.

This just set Mr. Ballcap off again. I was getting at least this third load of the day - and while it wasn't as big as the one I had taken 45 minutes before, it wasn't too shabby at all.

All in all, it was a decent day at the bookstore.
Posted by BikeGuy at 2:39 AM No comments: