I do like a guy - for the most part - who gets to the point. I mean, once a guy started with "have you taking your morning shit yet?".  While I wasn't into it, in an odd way, I was glad he got that fetish out of the way so we could both move on.  Immediately.

Or maybe it was just wishful thinking on his part and he hit up the right guy.  For me, he was the right guy - for right then.

27, 6'2", 195, brown hair, an ok dick in his pics, but nothing stellar. He eventually sent a face pic which clinched the deal - though to be fair, he was in anyways. He was less than a mile away and had no qualms about stopping by my office near the end of the day.

He was dressed appropriately. Shirt, tie, dress slacks. I work in a professional environment, so having a guy from the streets just show up is suspect. He looked the part of someone who might be having a meeting with me should we run into anyone.

When he showed, he sported a wedding ring. While it could be with a woman, he carried himself in a certain way that told me it was a man.  Or to a woman he'd be divorcing in a few years when he finally came out. I'm still guessing he is married to a dude.   And he didn't care either way - and neither did I.  I was planning on sucking his dick if he were single or married and either way, I'm getting the cock.

During our electronic get-to-know-you, I had sent some action pics, so he got the idea of what I did, though he already seemed to know.

Getting to my office is tricky, so I met him after he parked and took him to my place of work. I asked for a first name in case we ran into anyone that we could play it off.  He told me his name was "Chris".  We passed a few folks and ended up going to my office and closing the door - which automatically locks. A secretary sat not 10 feet outside my closed door.

Once in "Chris" asked if I had any videos he could watch while I sucked him.  I wasn't really sure about that, but showed him one. His cock was rock hard in his pants as he watched. It felt nice. I unzipped him.  The cock came out.  It was much nicer than pics portrayed it.

While probably only 6.5", it was thick. THICK.  It had a great head and it probably had a 45 degree upward angle. But it was the hardness that I was loving. It was like steel.

He moaned slightly as my tongue ran along the underside of his shaft. I then wrapped my lips around the head and started taking him to the root. He had a few very prominent veins, as you can see.  And ones I could feel.  I fucking love that. 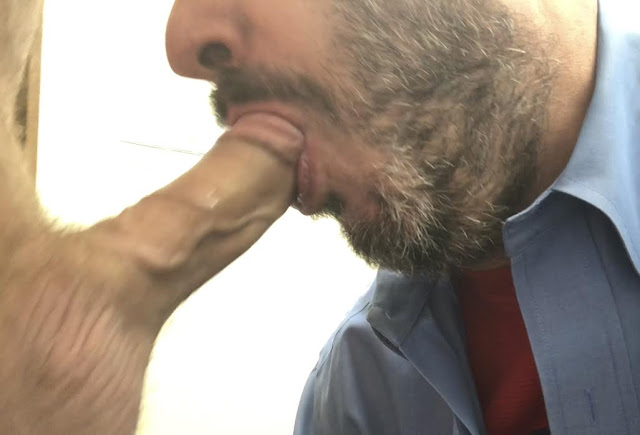 I was hyper aware that as I sucked, he was just swiping left or right and finding video after video on that phone. Ironically, his Grindr screen name was 'Discreet', but here he was happy to see other guys fuck my face, or ass, or me worshipping their cock. Discretion was only on his terms.

He must have gotten to one of me taking it up the ass, because he whispered, "do you have a condom?"  I didn't quite hear him, so he repeated it. I told him I did not, which was a lie. It's not that I was trying to take his cock raw - though I would have played that hand - but I was sooooooo not prepped to take it up the ass. Had he given me time, or some notice that is what he wanted, I would have been good to go.

I'd have loved to feel that thick married rod up my cunt.

As it was, I took the phone from him and said, "let's make our own movie".  I half expected him to say 'no', but he didn't. I hit 'record' and we were off. I made a show of it, using my tongue and lips, before his shaft disappeared, then reappeared.  Over and over.

He knew the score of what we were doing and where, so he was good about keeping quiet. I'm not sure how vocal he'd be otherwise.

Normally I can gauge when a guy is getting closer due to his voice or his cock getting harder. But he was quiet and there was no possible way I think his dick could have been stiffer. Both hands went to my head, and I figured out we might be nearing the home stretch.

His hips picked up speed too. He started really fucking my face - not that I couldn't keep up. And I think after almost 800 entries (I know, can you fucking believe it?) that I'm not a gagger. I'm an expert cocksucker.

My biggest fear was me doing the gagging noise. As thick as door is, I couldn't guarantee it wouldn't be heard by my secretary.  ....and it is brand new carpet, so I didn't want any semen on there either. I mean, I wanted it all in my mouth.

If he noticed the near gag or my commitment to the effort, he didn't let on. Or didn't care, now that he got his.

He pulled up his pants and was ready to go. I walked him to the elevator, passing a few co-workers along the way, and then headed back to my office to finish some work.  One colleague popped her head into my office, wondering who I was interviewing and if he was 16.  She was surprised when I said he was pushing 30 and was at a certain point in his career.

While we were chatting, all I could think about was the load I was still tasting in my mouth - and when I might get it again.
Posted by BikeGuy at 9:50 PM 3 comments:

I was in DC minding my own business - well, kind of - when I got a message on Scruff.

Actually, I was cruising there for a while, getting lots of false leads of guys who pretended to be interested until you push to meet. Then they're like fucking Casper.

The guy next to might have, as he grabbed his coffee and found another chair somewhere else.

This was last Friday. "Holiday" weekend for some. He was leaving work and going to the shore with his husband in a few. I didn't have a place to take him, as I traveled with others. But I told him I was 700 feet away - which he knew - and to stop by to say 'hi' if he wanted. He said he'd be there in 15.

I had already scoped the place out and had a plan, if it came to that. A multi-tiered plan.

He entered, saw me and came and sat next to me. Maybe it was just my libido, but he was hotter than fuck right then. We exchanged names, but for the life of me, I couldn't remember it, so we can call him "Larry", I suppose.

This is when he's telling me about his travel plans. I had travel plans too.......my hand, as it slowly and purposefully made it from the arm of my chair to my crotch. Larry watched every movement. He saw my right hand pass over and land on my denim covered crotch. He saw it slowly, but deliberately, grip the mound that was there. To the unsuspecting, I'm not sure anyone would have caught this. Larry was suspecting.

I didn't really need to confirm, but I thought it important he hear it come out of his own mouth. I asked him if he wanted 'this', while I lightly squeezed. He said 'yes'.  I made him say it. "I want your cock", loud enough for me to hear, though luckily, someone was grinding beans right at that moment. No one else could hear.

I told him there were two bathrooms behind him. I didn't ask if he would be comfortable doing it there. Giving options is giving opportunity for rejection. I wasn't in the mood for that. The last 90 minutes had been constant rejection.

The bathrooms were down a side hall. The hall was visible to about two-thirds of the shop, but no one behind the counter. Unlike most public places in DC, there was no code to punch in to gain access. I had to ask no one, leaving less people to be any the wiser.

Without hesitation or even prompting, he said, "I'll follow you in".

I got up, and went to the first door. As I opened it, someone was right behind me, but not Larry. Honest to fucking god, it was a priest. A ginger priest. He paid me no never mind. He must have come in the side door close to the bathrooms. He put whatever he was carrying down on a shelf and went into the restroom right beside the one I was taking. I let the door close.

30 seconds later, the door opened. Larry secured the lock and immediately his hands were undoing my belt and pawing at me jeans. Who was I to stop him?

He went right to his knees. The man had an amazing mouth. Clearly very very very experienced.  Sad but true, I could be quick on the trigger this day. I know it was public and we should be quick, but I didn't want to just blow and go THAT easily.

I made him slow down. He took out his own cock and balls. That was a gorgeous cock he has. Maybe 8", filled out and fleshy.  I was in awe of it.  I pulled out of his mouth to cool down. But asked if I could suck his cock for a few.  He agreed. 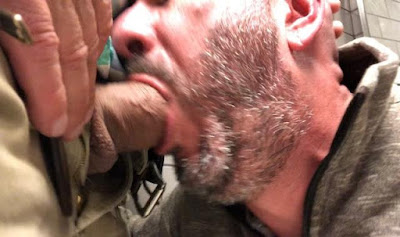 It filled up my mouth so nicely. I felt his hand go to the back of my head like it was the most natural thing in the world for both of us. I could have sucked it all day - even in a public restroom. But I also knew that's not why we were there.

Sometimes I'd squelch on this type of deal and be a manipulative cocksucker. But for some unknown reason, I liked this guy - though we didn't even know each other. Fuck - I don't even know his name.

He pulled out of my mouth, as I suspected he would. He got down on my level (as if!). I stayed there for a moment as well. 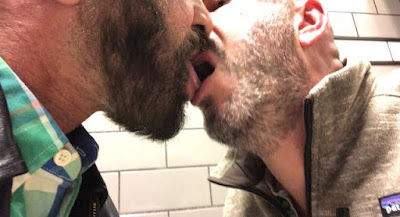 Oh. Did I mention he had no issue with video or photography?  Clearly he didn't.  And his lips weren't just good on the head of my cock. He was an excellent kisser.

Then it was his turn to go back down on me.

He was working my dick like mad - mouth only. It's all he needed. I was so wired as it was. Before we even started he knew I had a two week load, yet I felt the need to remind him.

Here he is keeping up with the volume. 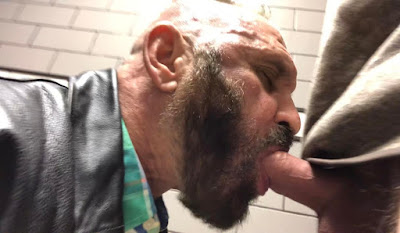 I can be a vocal cummer, but it was a public place with tiled walls. It was potentially risky, though I could easily just walk out the side door and disappear into the crowd if needed. Still, I made a concerted effort to keep it all in check.

My groans were low. My voice was too. It was the aftershocks I get at the end of the ejaculation that throw me. It's almost - if not completely - involuntary. I made sounds along with the quaking of the body.

He thanked me, and I him. We left the bathroom together, no one around, no one to see. No one to cast dispersions.

Not even a red-haired / bearded priest.