Sorry about the unexcused absence. 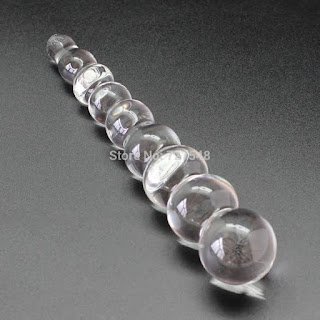 And even more rare, was someone using one on me.

So he showed - and in his pocket I saw something wrapped in protective gear. I guess that stands to reason, as one wouldn't want cracked or chipped glass anywhere. I know I wouldn't.

The session started with a little frottage....on both our parts. Then I was down on my knees sucking his cock. That did not last that long.

He actually teased my nipples, though a little harder than the previous time. I'm not complaining - just a statement of fact. Then his hand rubbed my 'taint and beyond, grazing my asshole to the point I shivered.

He told me to lay back on the home office desk. The heat had mostly been off up there, so I lay my shirt down on the desk to lessen the shock that would be the cold. I waited for the glass to emerge, but all I got was a painted finger - then two - put up my hole.

I've said it before - I'm not a fan of fingers. I find them too boney. Rarely have they ever made me feel good. This was no exception, though I think I put on a good show of pretending that I enjoyed them.

Finally he reached for the covered object. In the protective fabric, it also contained lube and poppers. He came prepared.

He must have had the thing in his car for a while. It was freezing.  .....and yet it felt so incredibly good.

I've mentioned before that I have had guys put ice cubes up my ass.....or had me put them up my ass while they watched. And I have inserted cubes up other guys too...and then licked out the melting water.

Still, his actions made me quiver and shiver, all in good ways.

He was slow with it - methodical even. Gauging his actions based on my reaction. And then he'd switch it up, whether it be slower, faster, deeper or teasing. The joke is - it was all good.

With my back on the desk he just rode me, all the while pushing his dyed mane out of his face time and again. Oh - and playing with my nipples.

It didn't take him that long. We were both primed.

He made the inside of my ass warmer when he shot his huge load into my guts.

As soon as he was done, he was dressed and gone.

I guess my big question is:  do I need one of these glass things?  Or was it just a situational high?
Posted by BikeGuy at 9:53 PM 6 comments:

KISS and a Fuck

It had been a while - not a long long while, but a while - but the KISS guy returned.

Save one time, everything has been oral. And while my ass twitches for cock, I know not to expect it from him. For the most part, it's an oral thing. He likes getting sucked, and I'm a cocksucker, so it pretty much works out.

It was morning. I had a late meeting off-site, so I didn't have to leave home at an early hour. He texted as he sometimes does, and asked if I was free. I was, but gave him a time limit. I assumed it would be no issue - a quick blow and go. I mean, when I want to, I cam make the head last, or if I'm in a hurry - regardless of their schedule - I can get a guy off in no time.

KISS guy came in his usual black garb - including shorts and flip flops, even though it was in the 20s. His long mane was out of control - clearly, he had just gotten up.

The guy knows about my nipples. Some guys know how to work them, most do not. He has learned over time just how to manipulate them. The problem is, he never really follows through even though he knows to what they are actually wired:  my butthole.

While I did go to my knees, I didn't stay there long, but it was by his insistence.....not that I was putting up a fight.

I was on my knees and he reached down to play with my tits. I'm sure I visibly quaked, though I don't know I notice these things much in my own self. He hauled me up by my armpits. Well.....'haul' is a strong word. He started to get me up, I helped matters along.

KISS turned me around. I dropped my pants. He added his own spit to his cock. I was bent over the kitchen counter, took a hit of poppers and he buried himself up my poop chute.

It was fucking heaven.

It wasn't a long fuck - maybe 5 minutes. But he was skilled at what he was doing. He made me ask for it - the dick, the fuck and eventually, the load.

It's a good thing my neighbors moved, and their house is empty. I'm sure they might have heard, even though the residence is hundreds of feet away.....and the doors and windows were shut.

I told him to send me to a meeting with his huge load shot up my ass.

I like how he stays in. I get to milk the shaft with my muscles. He groans, but stays put. I'm sure I got every drop.

I was still rock hard when he pulled out. I offered to jack off and let him watch me shoot, but he had no interest. He got what he came for...and you know me well enough to know I was ok with that.

I could have easily shot after he left, but I didn't. I straightened up, zipped up and left for my meeting - where I sat for over three hours with his fucking spunk coating my guts.
Posted by BikeGuy at 9:37 PM 2 comments: