His eyes were blue and intense, yet they had a certain niceness to them.  That is dangerous, as you might not always know where you stood if you didn't somewhat know the man.

Years ago (7-8?) we connected via YahooGroups.  Something about him intrigued me and we chatted now and again.

He was definitely all top.  In a chat forum, he was definitely all dom.  He had ideas of me sharing his and his lover's bed and fucking me raw while his lover was fast asleep.  It all sounded hot, if not unrealistic - but that is mostly due to the distance, as he was in the Carolinas and I was not.

RC is in his mid-40s, maybe 5'9" and 180.  His demeanor on chat was gruff, and he took no guff from the likes of me.  But he knew of my blog and read it. Sometimes he'd comment to me, but never on the blog, about things I had done and what a pig I seemed to be.

Last week, there was a leather event in town.  While I had attended on the outskirts (i.e. hitting up the rooms of a participant a few years back), I had never been a part of the actual event.  That changed this year.

I worked the event and mingled.  Sadly, I had little interest in me.  Oddly, newbies are welcome but the community is tight and everyone knew everyone.  No one knew me.  Still, I thought I'd be fair game because of that, but I think I wasn't for that very reason.

So imagine my surprise that by screen name, I see RC on one of the iPhone cruising apps.  He confirmed it was he. The next day I was at the event and told him so. He said he'd be at the vendor fair, where I already was.  It wasn't long before we ran into each other.

With his boy's back turned away from us, and the boy never noticing me, RC reached out and grabbed my left nipple and squeezed........HARD.  I admittedly cringed in pain.  Something I did not want to do being surrounded by heavier duty leather men and a room full of torture gear.   ...and everyone who read this for content knows I react much more sluttily to the light nipple touch.  He knew this too - he just didn't give a fuck.

He leaned in to his boy, who never did turn around, and said he was going up to the room. I followed at a respectable pace.  We were in the elevator together, alone, and he much more lightly played with my tits.  My knees went weak.

I was a good boy.

A few minutes later we had access to the room.

"Strip" was his only word.

All my clothes came off.  Our eyes never leaving each other.  Those blue eyes I kept staring into as I shed my pants (nothing underneath) and my t-shirt and socks.  He stood full clothed.  He told me to kneel.   I knew enough not to try to disrobe him unless he said / told me too.  He didn't.   "On the bed, on your back" was the next command.

RC went to his room refrig and pulled out a package.  Inside were old prescription bottles, taller thinner ones.  From previous conversations I knew what they were.

IF he ever jacked off, he saved and froze the load.  Devil's Dick. 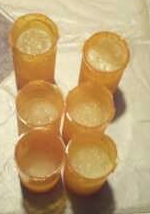 He opened the first one and it was solid.  He placed the entire container into my mouth for it to start to thaw.  He went back to playing with my tits.  Then something unexpected - he licked my asshole.  By the time he was done, thawing had started to take place.

"Open your mouth". I complied.  A huge glob of a sperm slushie hit my mouth.  I swallowed.  More came out, onto my mouth, my lips, my face.  What didn't go down my throat got rubbed all over my face and into my beard.  I immediately smelled like semen.   Of course, it was under my nose, but I would believe anyone would pick up on the scent.

"Lift your legs".  I complied.   The frozen sperm was pushed up, slow but deliberate.  It was accepted and immediately started melting in its new confines.

If you've never had an ice cube up your ass you won't know what I'm talking about.  Have a sexual partner try it with you, or vice versa. It's quite the experience of cold and hot at the same time.   The heat is physical, mental and psychological.

With his own spit on his cock, he pushed into me.  RC commented that the frozen contents were melted, but I could feel a mix of cold now and again as he pumped my ass.  Another cylinder of cold spooge was placed in my mouth momentarily.

RC withdrew and came to my side of the bed.  Taking the iced spunk from my mouth, I took his cock into my mouth.  I'd say he 'made' me, but he didn't.  It was a given.  Unspoken. Expected.  He knew I wasn't a novice - a boy he'd have to instruct or train.  I licked that cock clean.

I finally spoke.  "I have two of your loads up me".  He snickered.  "Try 24!  It takes 12 loads to fill up one of those vials."   True enough, he marked the top of each vial with how many loads were in there.

RC was a champ at fucking.  Solid strokes, only caring about his own pleasure, but inadvertently making me feel good.  Honestly, my pleasure was knowing he was feeling good, though physically I was not displeased.

Depending on how he moved, I could still feel waves of cold now and again.  It was an incredible feeling.

RC climbed higher on me, getting deeper in me.  Pumping just a little harder and a little faster.  "You're a fucking pig".   Well I couldn't refute that statement he made while he fucked me, could I?   Somewhere he called me a "whore".  Again.......I had no way to object given the circumstances.

Until he squeezed but never shut his eyes - his blue eyes - and muttered sounds, not words, I didn't know he was that close.  He was.

His unwavering blue eyes looking right into me, or through me, as he went past the point of no return.

He stayed in me as long as he could.  But he did something unexpected and slipped out at the same time.  Not unwelcome, but unexpected.  His lips met mine.

For such a calculating man (I won't say 'cold'), his lips are, without a doubt, the softest I might have ever encountered.

Like his eyes - warm and blue, but still steely in their gaze, the softness of the kiss could be confusing.

He looked over my shoulder, and I knew he was looking at the clock.  "You can tell me to get the fuck out, you know" - and he did.

I dressed, knowing not even to think about asking to wash my face or do any clean-up. I'd be going back down to the activities fully loaded and with sperm on my fucking face and in my beard.  I would be going down smelling of sex.

That is what I felt like - not that it stopped me.

He was 27 and for the record, he contacted me, not the other way around.  I think last time I did a 27 year old, I was in my teens.  Younger doesn't hold that much appeal for me, though I know I'm getting to a point where it will have to be younger, or the others will just keep breaking hips.  It's sad to call 9-1-1 to get them help and then flee before the ambulance arrives.

The kid wasn't bad, except for what would be his smaller penis.  Fully erect he might have just been under 5".    ...and I'm being generous.

He was tall, he was built, and he was a quiet sort.  Not much to say, not much to groan or moan about either.

Initially he went down on me and he was good at what he did with his mouth.  I went down on him as he sat back in a chair.  Eventually my fingers found their way to his ass.  One, then two, slipped in with no effort.

For whatever reason, I was rock hard.  I leaned up and slid my cock right into him. He had no problems taking it at all.  But after a few minutes, he wanted me out.  Story of my topping life, no?

It is all good, as he came over to fuck me - which is why I accepted his chat invite.

The entire thing was fine, but nothing more.  You saw my above comment on his size and while it shouldn't matter - every now and again it does.  I also couldn't help get over the fact that I was kind of old enough to be his father.

Maybe he was me 20 years ago, really liking older men.  Nothing wrong with that. I just didn't want to be the older man.