I docked my bike at the appropriate station and walked the block to the address I was given by the guy on BBRT. The building itself was substantial yet something on the door made me take a mental note to look up the residence itself later.

I was told the doorman would ask my name when arriving, which wasn’t unusual. Bringing a picture ID was an odd request. Odder when they took it and made a copy. They announced me and I was given the ok to enter. The lobby was beautiful. Lots of mahogany (do you know where you’re going to?). Yet past the lobby things were very mundane. I waited at the elevator and joined by two other gentlemen, neither of which looked like they could afford to live in such a building. But hey, what do I know?

”Jim” told me the door would be ajar and for me to leave it as such. I said, ‘oh that could be interesting’ implying someone might walk in….then join in. He replied ‘in any other building, I’d agree’. So all my Spidey senses were tingling.

I entered the efficiency. He was there. His BBRT profile had such small pictures, that if you’re non- paying (like me), you cannot enlarge or easily see anything but the main pic. His main pics was his big, thick, raw cock about to go into someone's ass. 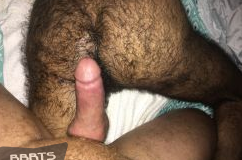 He was handsome enough. His hair was red, almost coper. As you’d expect from a red-head, he was pale as can be. He wore only red nylon gym shorts. The place and the man vaguely smelled like pot. He was a little doughy, but nothing bad.

Reaching for his package, I felt that it was thick as hell. Like and unlike last time, there would be little to no foreplay. Men in this town were DTF. I can totally get into that.

Jim was different though. I was to be on my knees at the edge of the bed, facing the wall. Walking in, until we were almost done, was the last time I’d be seeing his face.

Ass up. Shoulders down. I was prepared in every way. I was even pre-lubed. I was a little surprised when I felt his mouth on my hole. He really went to town with eating it. I couldn’t help wonder if he had figured out I’d recently been bred. I went back to Bret’s comments about telling him, but I waited. I can see where it could be a turn-on, but there is a percentage that would not appreciate that. At this point, I said nothing, though I did ask him if he liked, to which he answered in the affirmative. Or more, he moaned and answered into my exposed hole.

The man knew how to fuck.

He was slow and methodical at first. And then he was a ram rod. And then he wasn’t. He mixed it up very nicely, each time, somehow making it feel like it was deeper in me. The man was not about the quick breeding session. The fuck went on for almost an hour. About 30 minutes in, my position was just not working for me much…….and I eased down, with him still pumping, till I was flatter on my stomach with my ass still up.

You know I’m not quite a passive fuck. I pushed back onto his thrusting dick. We synched up quite nicely in that rhythm. It was here that he was telling me, he uses guys as holes. It was why I was facing away…….as to him, I wasn’t a person, but a purpose. He didn’t want to see me, just use me. I’m not sure if he was trying to degrade me or turn me on. He was doing both.

I’d say around the 45 minute mark, my ass was starting to get worn out. He was not to be deterred. While I was still pushing into the mattress, he moved my left leg more to the left, leaving me more open. If it’s possible, he pushed even further inside me – up into the 2nd ring. He picked up the pace. At this point, I was almost fucking the mattress, as if I were a 13 year old boy who just found how to pleasure his own cock….except I wasn’t really doing the work.

Save telling me about how I was just a hole to him and his preference for fucking strangers he’ll never see again, he wasn’t vocal. No moans. No groans. No dirty verbal action. So I wasn’t really surprised when there was no build-up or announcement to the orgasm. The breath got heavier, but that was about it.

So there I was, collapsed on his bed, as he slowly withdrew from me…..eventually. It probably wasn’t long, but it seemed so.

"Show me your hole".

I reached around and grabbed each cheek just so, and exposed the snatch he'd been plouging for an hour. 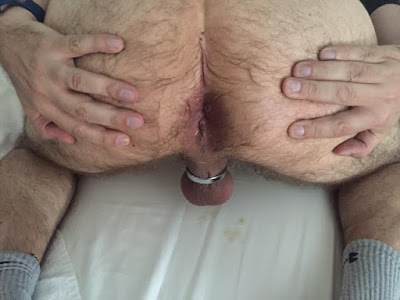 "Man, those lips are swollen and puffy.  That's a nice cunt".  He took a picture.

I rolled over and slunk off the bed. “Clean my cock”. So I did. With my mouth. It didn’t even taste like ass. It tasted like lube, sweat and semen.

I declined and get myself together. And another one who never offered a thing in the way of needing to clean up. I didn’t want to anyways. So I hit the door, and then the lobby, Googling the place as I left. Yes – it was ‘affordable housing for the homeless’.

I’d just gotten bred by a homeless man.
Posted by BikeGuy at 4:56 AM 2 comments: