“Dave” works two floors above me. Before I relocated to this building, he managed an IT project of which I initiated. He wasn’t responsive in that regard and did marginal work at best. As with a lot of IT projects, all the coordination is done over phone, email or webex. We’d never met. Save for a shitty picture in his email bio, I had never seen him. To be fair, everyone’s pic in Outlook looks shitty. This was not a reflection on his looks.
Flash forward a year or so and I’m in a new role at a new building. One that houses IT. I’m there a few weeks and get pinged on a ‘dating’ app from a guy who has a chest pic, but no face one. He’s less than 400 feet from me. As there is nothing around this building, it can only mean it is coming from inside the building. Unlike my last place that had over 10,000 folks in that building, this has less than 1,000. It’s not as easy to disappear.
The app guy thinks he recognizes me and after a little back and forth, as you’ve already suspected…..it’s Dave. We actually meet to say ‘hi’, but he’s not my type. Still I don’t say that. He asks if I’d like to go out sometime. I mean, you’ve read me, I’m not the ‘date’ kind of guy. I politely decline and say I am kind of seeing someone. That is that. For a while. Now and then, I get a ping, never an email, to say ‘hi’ and he tries to gauge my interest….and no longer for dinner and dancing. I continue to deflect and defer.
Not quite concurrently, but on an adjacent timeline, a long time friend and my relationship has taken quite a turn. “Jack” quite honestly, knows everything about me. We’ve known each other forever, and have had very candid conversations over the decades. Like I said, he knows everything about me. He knows about this blog. He knows about the stuff that doesn’t make it into this blog. He sees pictures and videos that you don’t. He reads this blog. He’s reading this too……I suspect.
Somewhere 2-3 years or so ago, Jack, while physically distanced by 1,500 miles or so, made a comment via text about one of my blog entries. We chatted about it. He made suggestions of how I should serve men better. He inferred his own likes of how I should serve. He dropped the word, ‘boy’ in there once or twice. It was a change in our style. Not quite a subtle one, which he may already have known. He was testing me a bit – and we both knew it.
...and I bit.
The good and bad thing of having someone know so much about you is, they know the buttons. They know your weak spots. They know your desires. Jack had all of that in his back pocket. And he was starting to use it.
Our random text conversations about our lives, work and families would eventually come around to “BikeGuy”. In each string, he’d wedge in things about my subservience and how I need to maximize that potential – most of them with explicit suggestions. Until this time, I don’t know I’d have ever taken Jack as a top, let alone a dom, but we all change over the years. Or we all get seen eventually for who we are.
At one point, Jack asked if I had a pic of me in a collar. I said I’ve never had one on, he replied, “You would look great” (duh!). Then when I was telling him in detail about an affair I was (and am) having, he told me in no uncertainty that the guy should lock me down in chastity.
Chastity to me is more slave than sub thing, but I get it. I rarely use my dick anyways. But like Hispanic kids anywhere in the U.S., I am not fond of being put in a cage. Even part of me. But more than once, Jack mentioned, HE would like to put me in a device. 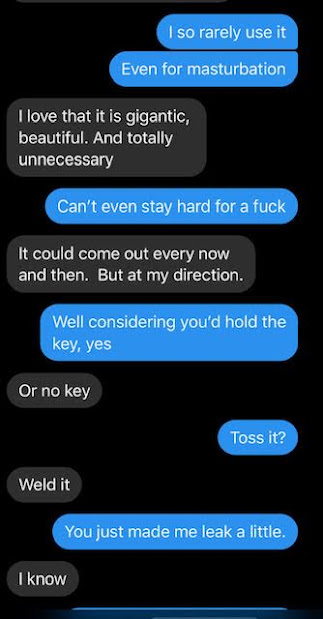 Often, more than I think I care to admit, he would have me rock hard. It is the benefit of knowing my triggers.
So, as it happens, this last week Jack and I were conversing. We didn’t even start friendly, but more in a dom / sub manner. It went on and off for a good part of the day. Between on-going conversation and the Covid horniness my dick was rock hard. I was horned beyond belief. So the ping I got on the app now was fortuitous.
In theory, and left to my own devices, I would not have followed through on this. I’m not sure I’d have even replied at all. But going with the moment and the on-going conversation, I took a screen shot and SMS’d it to Jack. 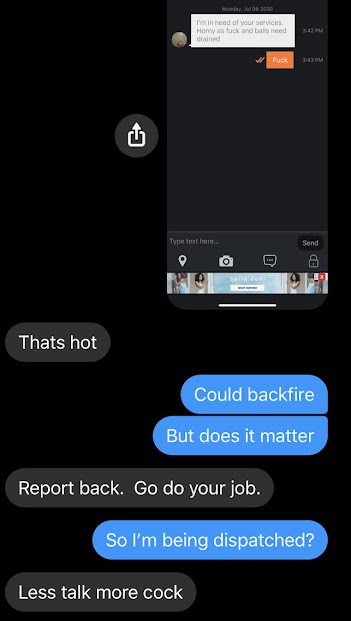 Dave was invited down. He locked my door, my blinds already drawn. Whereas I’d normally fawn all over the feeder, this was not the case. I didn’t get on my knees. I didn’t gnaw at his crotch or bat his hands away from him own belt. I kind of chuckled to myself when he took off his work ID.
I didn’t look up. I waited for him to undo his pants and take out his dick. It was exactly how I imagined. Slightly beefy but short. Short is kind of fine, but fucking trim your pubes. Most of them were longer than his cock. My first swipe of my mouth, I had no less than eight rogue hairs that ended up in said mouth. I’m not a fan of that.
Still, I persevered, as I had marching orders.
For him, it was a great blow job. For me, it was fair, at best.
I’ve said it before, I love cum, but not necessarily a load collector. I love the art of extraction as much, if not more than the actual jizz. I like the process, the aural component, the body quaking, the trying to hold off even when they’re at the point of no return. This was not that. I was there for the load and to report back. Simple as that.
I swiped up and down on his cock. I tried to avoid as much hair as possible. There was no verbal back and forth, nor did I want any. I didn’t even go to my knees. I sat in my desk chair for the entire process. I’d like to think, in Jack’s mind, there was a certain humiliation / dom satisfaction in making me do something I love and reducing it to a task. That kind of aroused me.
Dave came. No noise, but given where we were, it is the way it should have been. I swallowed. It was a hefty sized load. It never occurred to me show it to him, like I do so many men before I ingest.
I’ve honestly had men totally naked dress faster than it took Dave to pull up his pants and put his ID back around his neck. But he left with a smile, satisfied and knowingly on how I perform –and that I do perform.
Jack was happy - for the moment - in my performance. In my responsiveness. In my submission.
A day later, I got a message to that I was a good boy. And I should find private time to go and drink your own. I assumed he meant my load. He did not.
Of course, he's read, and knows, my goal of learning how to drink a man's piss. You've read about that in this very blog yourself.
I'm paraphrasing, but, "go down stairs, piss in a glass.............and drink it. 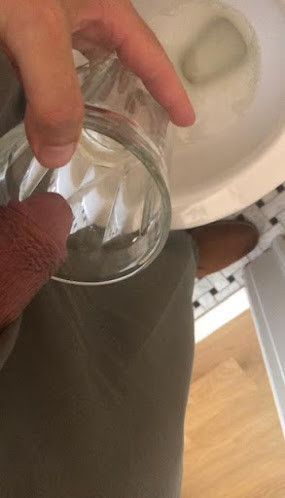 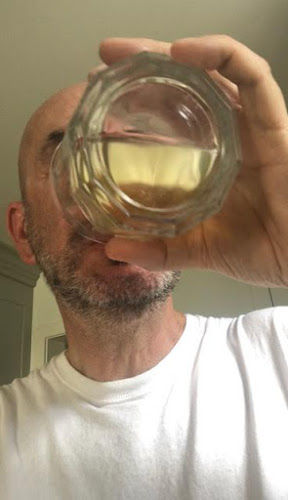 I did as I was told.
I videoed it and sent to him.  He was pleased.
In a way, so was I.
Though, it was semi-strong and had I not taken a break in chugging, I would have tolerated it better. On the video, I made a face. An involuntary reaction?  Maybe, but it was a start.
He flexed his proverbial muscle and won.  He said we would have our old kind of discussions and relationship, but I'm not 100% of this. I'm not sure how we could. But time will tell.
For the record, this is the first time in 800+ posts that I have asked permission to write a story.
Posted by BikeGuy at 8:48 PM 2 comments: