It was his last day working at the same place I had been. He was a pharmacist that I had blown a number of times. Physically he was fine, but at first glance, I’d say he wasn’t “my type” – which honestly, I no longer know what that means anymore.

But during the first encounter years before, he proved himself worthy with his attitude. I’ve said it dozens of times in this venue over the 800+ posts here: attitude with me will be a much bigger factor than looks or cock size.

”Josh” is about 5’9”, 190-ish and only about 6”. But it was his mouth (via talk), that made him so attractive. He was confident about who he was, and made it clear who I was at least in terms of our hierarchy. I was the cocksucker. He was the feeder.

It was later in the day, but not near a shift change. I don’t know who actually has access to this place, but I assume doctors and nurses who need to shower before or after procedures or ORs. I know my ID did not work on the door. Josh’s did. He keyed in and in we went. The place was empty. There were stalls, benches and such, but he made a beeline to the showers.

There were two stalls. Tiled top to bottom and a full length curtain for each. I followed him in and he drew the curtain shut. At this juncture, there were no words. Hands on my shoulders. In my suit, I went on my knees not knowing or caring if the shower floor was wet. If so, I’d figure out what to do after the fact. As it turns out, it was dry as a bone.

I pulled at his belt, zipper and clasp. The pants fell down just enough. I did chew at his briefs briefly, but we are quite public and one just didn’t know what might happen. So he pulled them down exposing his 6” sword. I went to town. 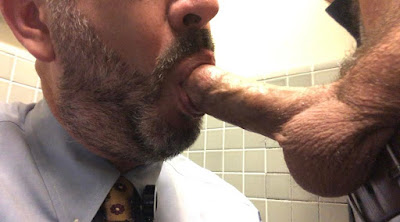 With minimal slurping – not that anyone could hear – I bobbed up and down on his cock. I kept the cock lubed, but not overly so. It was easy gliding in and out. He reached out – hand to my head. Touching it. Then guiding it. Then gripping it. He has always been an engaged feeder.

As we would have heard any door open or close, he was safe to talk a little. “You like that dick, cocksucker? You gonna miss that cock?” I moaned my answers, as my lips were still wrapped around his shaft. He already knew my answers anyways. “My balls are full today. You’re gonna drain ‘em for me, aren’t you?”. How I fucking love hearing shit like that.

At this point he just takes over. He loves grabbing me by the tie and pulling me towards him. Tight. So he does. Over and over. He’s fucking my face. He uses one hand on the tie and one near the back of my head. He has the opportunity to do both or either. I’m good with both or either. At times he braced himself against the tiled wall, leaning into me, putting his cock down my throat.

He pounded my face and throat. I took it like a man. A cocksucker, but still a man. And was appropriate, he had a silent, but large, orgasm into my mouth. I took it. I showed him his semen before swallowing it. He grinned, probably more at his copious volume than at my deed. I have a feeling he’s very proud of what he does and just expects me to do what I do. 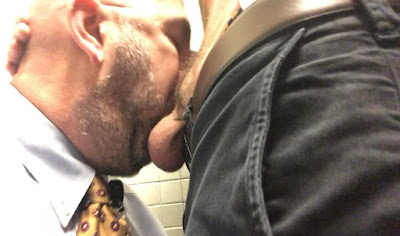 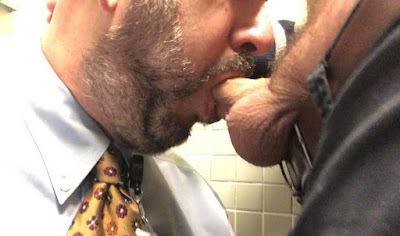 He pulled his pants up, zipped them and as he pulled the shower curtain back, while I still knelt there, said, “Later faggot. Maybe I’ll see you around sometime.

I had fucked the guy before. Once.

He’d been after me for years. But truth be told, I wasn’t that interested and he was like 16 miles away. Two would be boner-killers. I know 16 miles doesn’t seem that far until you know it’s mostly 35mph roads.

Now he was closer. 8 miles, if I was at home. But here I was at a Starbucks, less than a half a mile away. He was decent. He had piercing eyes and an all too welcoming hole. He could make have resistance – and tightly – when he wanted, but going in, it was like throwing a hotdog down a hallway.

Fast forward three weeks (which included 2.5 weeks of begging for it again). Same Starbucks. Same app. But now he had a friend over and he could get rid of him. I asked if his friend wanted to watch. He claimed said friend didn’t know what a slut he was. “Doubtful”, was my internal monologue. I did have the wherewithal to ask if his friend was good looking. If you read me, you know me well enough to know that looks are normally my things - - if I’m getting fucked. But if I’m being watched, I’d rather not have some slob eyeing me. I need some motivation. He claimed he was.

Seven minutes later, I’m at his door. He’s getting ready and tells me to go upstairs. His friend is indeed good looking but not exactly my type. Mid height, dark hair, small dick that I could tell right away through his mesh jock. No offense to mesh jock wearers, but why? I mean, unless you’re a stripper. ……and even then……..meh.

I wasted no time. I started stripping even before the host arrived. I finished before he arrived. Immediately we got down to it. He got on his knees and started sucking my cock. The friend stayed on the bed, watching intently. He watched the cock go in and out of the mouth. He wasn’t looking up at me, to look in my eyes, at my reaction. At least not yet. He was fixated on my penis going into his buddy’s mouth. He was interested in seeing my hand on the back of his head, holding his buddy down. There was no gagging. Whore.

I asked the buddy if he liked what he saw. I mean, he’d be lying if he said ‘no’, right? He was interested but not really hard. That should have been a clue to me. But he was into it. And I like being watched. I think I know how to engage and put on a show. My take is: if I’m going to be watched, I’ll give them something at which to look. (just because it’s a sex post / blog doesn’t mean proper grammar shouldn’t apply.)

The guy sucking me took a break and had to run down the hall (should have been a second clue) for a minute. I asked the second guy if he wanted to blow me. He was trying to be deferential to the host, I told him not to worry about it. He got on his knees and put my cock into his mouth.

He was good. Not great. At some point earlier, he mentioned how he had four kids, but now only into guys. He was better than a novice cocksucker, but not as good as the host. Still he was more enthusiastic than the host. He struggled with my last inch, but I tried to help him with a grip on the head. The host wandered back in and got on the bed….face up. As I was standing near the side of the bed, he scooted up and started eating my ass. It’d been a long day and I can attest I was not squeaky clean. Maybe not even by a long shot. It did not deter him. He munched hole like a champ.

The buddy cocksucker kept up his valiant effort. My dirty talk went to him now. “Looks like you’re really working on that cock, like you’re really working for the load”. He nodded. “Go for it – keep working it, maybe you’ll get the reward”. He pulled off talking low saying it should go to the host and went back to work. “It goes to whomever I say and whomever I find worthy”. The host pulled off my ass and asked what we were saying, I told him to go back to eating my shitter. He did.

As it turns out, fucking was on the agenda. I wanted the host on his knees at edge of the bed. Like last time, I basically fell in. His buddy talked about the load he took earlier that morning and the night before. Whore!

I fucked. I did ok but nothing great, though by both of their assertions I was doing well. I think the bottom was a good actor with his moans and such. The buddy got behind me and played with my nipples, which normally does so much for me. With this guy? Nothing. He was remarkably bad at it – and I couldn’t figure out how. Still, I persevered.

The ass squeezed my cock but hard. He has muscle tone but doesn’t use it much. At least with me. Yes, he squeezed out every drop. But I shot deep deep up him, so there is that.

There was no ceremony about my leaving. I started to find my discarded clothes, glasses and phone. This is when I realized there were clues I missed. 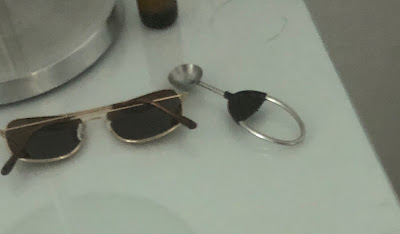 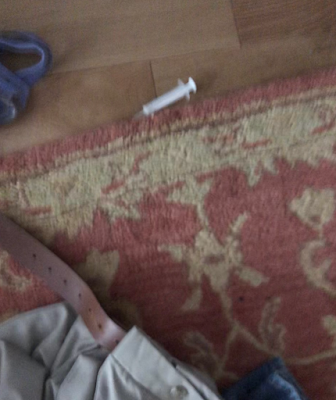 The guys were ok, but not good enough to put up with that kind of drug use. I’m not one to judge on this, as I had my drug time, but once you start with needing spoons not for coke and syringe (that I almost stepped on), I really have no need for you. My first clue should have been two guys “hanging out” in the middle of the day.

I told the host after he hit me up to tell me was looking forward to the next time, via Scruff, that was the last time. He immediately knew why, without me saying a word. “It’s not what you think………….I just use that to measure out GHB and crystal”.

Ummmm….no, it’s exactly what I thought. What the fuck did you think I thought it was for – your insulin? It is the problem with most users, besides not being in the moment (limp dick), they’re usually stupid too.

There are plenty of men with which to play, I will actively avoid the known addicts.
Posted by BikeGuy at 8:36 PM 2 comments: