I was just sitting there, minding my own business and working on a report when my phone buzzed. Someone on an app had summoned me.

Being a slave to my device, I picked it up and saw a man named "Robin" had hit me up.  He was 75 feet away. And if we've learned anything from these apps, it's more about who is close by than how they look. Sometimes immediacy is more important that how attractive they might be.

We chatted for a few, neither committing to anything, so I could either get back to work or to tease the trigger. So I sent him a pic of me swinging on a black cock.  It got his attention - not just that I was a cocksucker, but that I dug dark meat.

He got points for picking up on the clues so easily.

I couldn't have him up to my office, but I knew of a secure bathroom on the floor of the building in which he was visiting. I met him five minutes later.  He texted me that he wouldn't have much of a load.

Since I didn't really pay attention to his profile stats, he was shorter than the pictures he sent me seemed. And yes, he was and looked young.

I won't lie, I was a little nervous about blowing a guy at work. Sure, you've read it - I've done it before, but those were a little more contained venues and times.  This was a public restroom - granted a stall of one where the door locked, but on a busy hallway. People potentially could see coming and going and two guys going into a one person john.

Let's be honest here:  we all hope for stereotypes when it comes to black cock. Usually it doesn't disappoint. This guys cock was nice and all, but very very average.

Of course, I sucked it. 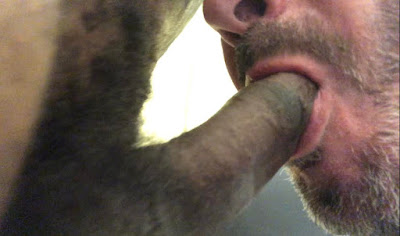 I loved taking it all the way in my mouth. He was enjoying it too. We were both semi-quiet, considering the circumstances. My lips hit his wiry pubes. And then I went back up again to the head.

The guy ended up holding my head and fucking my mouth. I loved it. He really put it to me too. Bring it!

This went on for longer than I expected. I thought for sure he'd be a blow and go. He was not. He was 22 but not quick on the trigger. Since I had postponed my meeting by 30 minutes, I knew I'd have time to finish the job.

Maybe he was off on his assertion that he wouldn't have much of a load. Maybe he didn't realize how big it would be. Compared to other guys, maybe he didn't know how big big was. It may have been a smaller load for him, but it was a fucking big load.

I captured it all. I swallowed it all.

I started to get myself together. As I was pulling up my pants, he opened the door and left.

He did send a Grindr message later thanking me for my mouth. I reciprocated about his cock.

I went back to work with semen on my breath.
Posted by BikeGuy at 6:09 AM No comments:

When on Scruff - one should really pay more attention.

I was chatting with a 'traveler' to the city.  Then another guy was messaging me. I had a better feeling about him. He was slightly younger, but not young. He was slightly in better shape. It was that feeling you get when see a guy on-line that you feel you might have a vibe with - whether it's valid or not.

It didn't take me too too long to figure out they were messaging me from the same hotel room. But by that time I had committed to the first guy. But the second guy chimed in to say he wanted to see me fuck his "boy".

I shouldn't get so hung up on age, but the boy was the older guy. He said he was 49, but looked a little older  6'0", 210, bald with a grey beard. Still, he looked sexy as fuck. But I kind of assumed he was going to fuck me. You know, I backstory all this shit when I see their pics, hoping, usually against hope, that they'll turn out the way I want them to be.

The dom in this relationship was younger - maybe by 10 years. About the same height and maybe around 185. His hair was brown - on his head and in his beard. He was just so much sexier.

I agreed thinking one of them would fuck me. I figured if #2 could get me hot enough, I'd stay hard enough to fuck #1 and then #2 would pork my ass.  A boy can dream.

Shortly after arriving at their hotel, we were down to skin. The cuter, younger guy came up to me and we made out a little. His husband got on his knees and sucked me.  The more dominant one pulled off my lips and said right to me, "I want you to go into him in one push".

Admittedly, that made me even harder.

Soon, the guy meant to be fucked was on his knees at the edge of the bed.  Soon, I was in him. I lined up - and remembering my instructions, with his partner right beside me, went in.

It was easy to do. There was very little resistance. This wasn't his first time, possibly not his first time that day - though it was early, so maybe.  He could take my dick with no issue. To be fair, I was probably performing more for the husband than I was for the guy I was actively boning.

But when it comes down to it, I like to be watched.  Sure, I like to watch, but I seemingly love an audience, even if it is just of one.

I did pull out and have the guy lick my dick clean. He was ok with that. His bf played with my tits. We made out a little. Then he gets in front of me kneels on the bed. He doesn't ask for it, but he doesn't protest when I place my cock at his hole.

I push. Once. To the base. I assumed the 'one push' rule applied to both of them.

This guy was tighter. He knew how how to work his hole.  I told him so.  According to someone to whom I've relayed this story, I was told I made a faux pas by telling the guy his hole was much nicer.

Granted, it might not be the most gracious thing to say, but all buttholes are not created equally. When you play with a couple, the odds are, one is going to be favored over the other.

I thought about defying him / them. Sometimes one can loose control unexpectedly of their impending orgasm. Right?

But I am - or can be - a good guy. They swapped places and I went for the finish line


I'm not sure I could have done it without the audience......the one guy. Sure, I used the other guy, but he was not the one for whom I was performing.

I think we were all good with that.
Posted by BikeGuy at 9:19 PM 2 comments: