Back to the Beginning

So, there I was, not far from where I grew up.

I don’t live far from there anyways, but I knew due to circumstances, there was almost no reason for me to be out this way again. Everything from my childhood was almost gone. But since I was out that way, I took a slight detour from the errand I was to be running.

There is an extensive park system near where I grew up. Rideable by bike, though it was a haul from my parent’s house to there, but if so motivated, it was doable. And since at the time I didn’t have a license, biking, it was.

I’ve written about this place a few times. Not that the pieces were about this park, just some of my experiences that took place in the woods. Like my first time.

While I committed my first time to this blog, it’s not a story I tell often. More often than not, it elicits some kind of sadness from others. I don’t think I tell the story the wrong way – I relay it truthfully, but I suppose if you weren’t in my shoes, it the tale does seem cold, heartless, and yes, rape-y. Hence, the sad responses I get from most I tell it to. There are those, who are aroused by it. I’m ok with that. That experience made me who I am………..or what I am, I guess.

They say lightening doesn’t strike twice, but that’s a lie. If conditions are there the first time, chances are, it’s a good place for it to take a second swipe. But this is decades later. Gone was the cinder block outhouse with the scrawlings of cocks and number and hastily hand written ads. Gone are the picnic tables that men might loiter near, waiting to see what is what.

What was still there were the woods. And the paths. 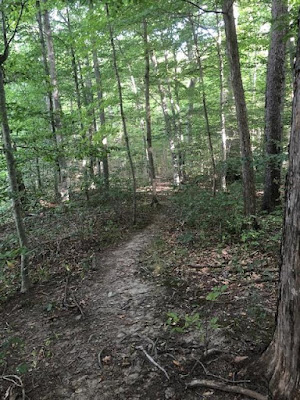 There were 2-3 cars already in the parking lot. I’d use this lot once I got my license and could borrow dad’s car. But until then, I leaned my bike up against a tree. Some people were sitting in the cars this day. One car was empty. That meant they could be back in those woods, or have gone to take a run throughout the park.

I wasn’t really looking for dick this day. Honest. I mean, should it present itself, I doubt I’d turn it down. But I got out of my car, and took off down this trail.

After you’re in the woods, there are several paths one could take. With nods to Robert Frost, I took the one less traveled. The one that made all the difference.

It was this path that I followed a stranger – a man – down, after he gave me a certain look that would draw me in. I had not heard the word ‘cruising’ yet, so I had no frame of reference or what exactly should and should not be done. There were protocols, but a boy my age wouldn’t, or shouldn’t, know such things.

This day, I followed that same path.

Then, like now, the path wasn’t a widely traveled one. More often than not, you had to push your way through thicket or scrub bushes. To take this path, you really had to want it. The terrain is hilly. Some are quite steep, some more gradual. This was the latter. But it led down. Down down down. Until you came to a slight clearing………….here. 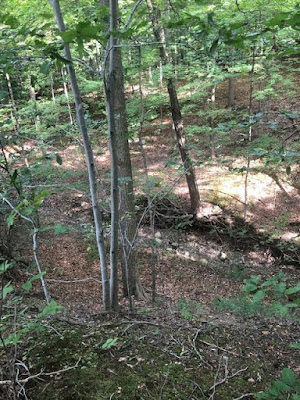 I didn’t go down to the exact space where “it” happened. I stood up here on a slight ridge, looking down at the scene, the way an observer might have that very day, or other days when someone was down there doing something that happened in those woods at that time.

Like that mythical observer, whom I’m assuming would have been turned on, I too became aroused. I thought in detail of the encounter. Every detail. I don’t romanticize it to make it more palatable. I relived it the way I remembered that day. That day that would change my life.

No one was around. I unzipped. I took out my semi-hard dick and made it hard. I stroked. I looked at the spot in the distance. I knew what had gone on there. I know how aroused he was – and I knew why. I might not have then, but through the years, I tried to see it from his point of view too. I kind of became harder.

I jacked my dick, not even closing my eyes, as one might when initiating self-pleasure. I played the scene in my head. I took it past that even, as to what he helped form, what I’ve become. How, in so many ways, I’ve searched him out in other men…………so many other men. At 15 I wanted acceptance and found this. I’m still looking for acceptance and validation with each guy who fucks me – be it my ass or mouth.

I thought about him loading my ass down there in the clearing. I remembered him standing over me as he straightened himself up. I remember him just walking away as I lay there in the dirt and leaves with my first load of semen up my butt.

I shot all over the ground and the nearby plants as I envisioned that. Years later, I finally left my load, near where he shot his.

I have no reason to come back to this place anymore. While it’s my present and future, it’s really my past. As I walked out of there, I passed a guy on the paths who looked me up and down, kept walking but would look over his shoulder at me.

Let’s talk about piss – shall we?

My menu of things I sexually won’t do is way shorter than the ones I would. There will always be a ‘no’ list, but I would like to make it a little shorter.

Before I get into a few stories down the road in other posts, I feel this piece is needed to set the stage. So this won’t be an active sex post, per se, but a launching pad.

I know I’ve mentioned piss here and there before, but not in great numbers and even in limited context.

My first time with urine, was with a hot guy (well, late 1980s hot) who would eventually go on to be on the cover of Inches magazine. I first met him in a bookstore where he abruptly left our booth – and I thought he’d just taken off. Turns out, he met another guy, got the guy off into his hand and brought it back to the booth in which I was residing and made me eat it from his hand. I’ll admit, it was hot.

I’ve played in Monterrey, home, a hotel and a guy’s place other times. The first two were guys pissing on me. It was ok. The hotel, I was drunk and a guy wanted to come over, eat my ass and drink my piss. I had a lot to give and he took it like a champ. And the guy’s house, well, I think I wrote about (maybe all of these) before. He had a pitcher of water and wanted me to suck him but fed me some piss. Controlled, but still a lot. We didn’t get far.

A normal person would just say the act is off the menu. The thing is: I don’t want it to be. But I don’t know how to get over it. #A few years back, at CLAW, I approached a guy who claimed to be into hypnosis. I asked if it is possible to by hypnotized to get over this and to be able to drink and swallow piss. He said yes. We have back and forth emails, but never came to an agreement to do it. It’s still on my radar.

I did reach out to friend in Philly who took up drinking piss later in life. “Sam” went over to a guy’s house he met on line. The guy wanted him to try it, and had him lean over the toilet, so if it didn’t go well, he could just piss in there. But it did go well. Sam and the trick were both surprised that he drank everything. This still stumps me on how someone can do that first time.

Sam told me, it’s like the idea of eating ass. You probably weren’t wild about it. And I wasn’t. But I remember the reaction from the guy I did it to. And that I grew to like it. And then you kind of make it a mission to keep doing it. But like Sam and piss, I was drawn to eating butt immediately. So I got the analogy, just not how to get over the piss barrier.

Oh – and the funny thing about Sam is, he loathes the idea of getting piss on him. No one is pissing on him and even if it accidentally hits him, he’s done. So we have opposite experiences with this body fluid.

Sam and I talked extensively about the ‘no’ list and how after piss, I might be done with crossing things off – like the sounding kit he bought but refuses to use as he wants nothing stuck up his piss hole. I get it. Totally. But I said scat is a non-starter, and while he isn’t into that he did say there are worse things like blood and pus. PUS?? I chided him for what kinds of groups he might be running with. You can keep women and animals too. Not on my list. I’m sure there is a litany of other things that are the way outliers that I wouldn’t even care to know about.

All that said, I’m willing to hear people’s comments (they can email me privately, as opposed to comments)

And all that said, I have been playing more and more with piss. You read about the guy in the public stall who drank mine, but I have no issue giving (unless I’m pee shy suddenly). I have a few guys that it’s come up as of late, so we will delve into that here and there.