It turns out the situation was less than ideal.

He hit me up on Scruff. He was ok at best. But when will I learn that you usually have to downgrade every guy as they present themselves on sites like that – myself included. So if you’re just ‘ok’ there, chances are you’re less than stellar in real time.

But I’m that guy who keeps repeating the process expecting different results.  I believe that makes me insane.

The texts tell me where to go……and as you can see, he didn’t excel at his schoolin’. 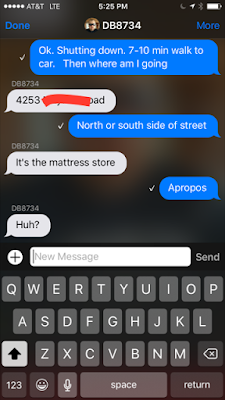 Now, I'm down for doing it at someone's place of employment and had he been remotely attractive, I'd have really suggested the showroom itself. But he was wussy and wouldn't even doing it in a corner or the store where no one could see.

The place was dead, and it is poorly located. If they sold a mattress there a month I'd have been surprised.

So as it was, we headed to the bathroom. Now for slow traffic store, there is no reason this bathroom shouldn't have been pristine. But fuck help me, it was a sty. And I'm all good with dirty bathrooms for sex, but you also know the kind of places those exist, and it shouldn't have been here.

The guy said he was 6’ and 200.  He might have been 200….30 lbs ago. I don’t mind some weight, but don’t fucking lie to me about it. It’s not like it is going to disappear before I show up. But lord, sometimes I just don’t know when to say “sorry….not gonna happen”. So into the bathroom I went, and down to my knees I went.

His cock wasn’t all he said either. “It’s kind of small now”.  Yes. This is true. And it took a while to get it up to its full four inches. Yeah – you read that right. I say it’s not about the size, and normally it isn’t, but give me something to work with.

And I say it’s about the attitude and if they know how to use it. This is true…..to a degree. But this dude had neither. Last year – just in a year – I sucked off 292 guys. Or loads. While it was a high volume year for sure, let’s extrapolate that out by let’s even say 25 years (and I’m being conservative….easily).  It’s safe to say I’ve had my share of cocks in my mouth, yes?

The guy has zero moves on how to get sucked. He would not stay still to do my job, which could be ok, if you had any sense of rhythm or pace or anything when it came to feeding my mouth or fucking my face. It was jack-rabbit sex…..and it was horrible.

Previous posts have mentioned I’m better with bigger and thicker cocks. I don’t know why, they don’t make me gag that much. The smaller ones…well they do. It’s like getting a bad strep culture done at the Minute Clinic. I always gag at those too – and yes, I get the irony.

I sucked for what seemed like forever, but was probably 8-9 minutes. The dick wasn't great - but he had to ask, "do you like my cock?  do you like the way I look?"

We are all needing some kind of validation on some level, but why now.....and why these specific questions. He put me in an awkward place.  I tried to mumble something of off the cuff that was noncommittal, but he asked again, wanting to hear an answer. So I lied.

So while he wasn't honest about who he was, the truth is, I wasn't either. So I suppose that makes me just as bad.

While he was asking and I was kind of answering, he was jacking. I'd rather not have a guy use his or my hand, but at this point it was whatever got him close. And he was.

He suddenly announced he was on the verge, so down on him I went and took his load.

To his credit, it was sizable and for a smoker (which he claimed he wasn't, but clearly was) the taste of the semen was not bad.

As he walked me out, he kept asking to see me again, but that will not happen.

That insanity I mentioned earlier on here?  I'm gonna break the cycle.  At least with this one.
Posted by BikeGuy at 2:41 PM 3 comments:

I once wrote here that I told Mr. Steed that if I hadn’t blogged for more than 2-3 weeks that I was probably dead.

Either I misspoke, or I have risen. Or I’m a zombie.

I apologize for my absence, but life and work – mostly work – has gotten the better of me. It’s not thatI’m not having sex, or that I don’t have a backlog of stories. I just have had little to no personal time. I am trying to rectify this, that is assuming anyone is even still looking here for an entry. But here is one.

He’d seen me on Scruff a few times before. Once I started a new job, his proximity to me dwindled to a few hundred feet at times. I surmised he worked where I did, or close by. Now and then we’d exchange pleasantries, but neither of us pushed for a meet-up. I think one time we did, but I deduced he might bottom more than top…..or was involved with someone else…..or both.

We will call him “Josh”.

Josh was working over one day not long ago. Pulling an extra long shift (that’s shift, not shaft) and had a short window for a break. He was wondering if my services were available. I made clear my services at this time were oral – no reciprocation needed. He said he’d be there in 10.

Sure enough, there he was in the hallway of my office.

Oh yes, I was still at work also. Suit and tie. Early in the evening, no one around save me. Me and my
lips. And mouth. And throat.

He was excited from the start. You could see the tent in his scrubs. Easy to feel too. He was fully erect.

I love scrubs. One pull of the tie at the waist and they almost always fall to the floor. These were no
exception. He stood there – unsure of where to be – as I put my palm and fingers over the mound of his plaid underwear.

I didn't even pull those down. I pried his cock out the opening in the front. This was a place of business, not a place to get completely stripped down for extended pleasure. He was on his break, I was needing to shut down the place.

Out popped a nice 6" cock. Decent thickness with a good head.

....and speaking of good head, I gave it to him. He tried not to moan. He knew the surrounding environment, even though I was 99% sure no one was around. Yet he'd make little gasps at my tongue swirled around his corona, or as it danced on the underside of his shaft as I simultaneously took him to the root.  I wasn't fooling around here.

I wanted to make him feel good. I wanted him to enjoy it. But I wanted to fucking get him off. He wanted it too.

He wasn't fooling around either. The way he grabbed my head and fucked my face, I was rethinking my perception of him being a bottom anything. As for the married to a man or a woman, it could still go anyway. But he was a man who liked head and knew how how he liked it.

Or he knew he liked treating me like a mouth. A convenience.  And I have zero issues with that.

If he wanted to get a little rough with me, I was ok with that. He must have been ok with that too, because with no words said, he grabbed my tie and used it as leverage to feed my mouth. 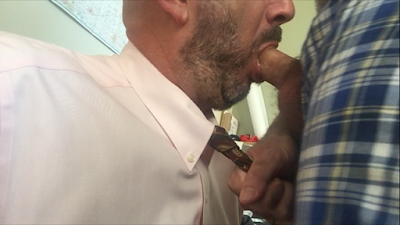 He was aggressive, but I felt he was testing me, and to a degree, himself. I think he was seeing how far he could go. I'm sure he did not have any idea how far he could take this - given the right circumstances. Yet it was all a good start.

He kept up with the tie or hand on my head until he muttered he was going to shoot.  He asked if I wanted the load, I said nothing and he kept on pumping. My silence was acknowledgement and agreement as far as I was concerned. And I'm guessing he thought the same, though I always hope that guys never take 'no' for an answer.

The load was huge. It had a lingering aftertaste, but there was a lot of spooge that I caught on my tongue to show him before I swallowed.  I don't know if guys like to see their volume or their seed, but it is my instinct to show them, with me assuming they are proud of what they did, what they produced.

And it is almost if he reads this blog. He reached out to hold my throat - though far too gently. He stroked it in what I'm assuming was to stimulate my reflex to get me to swallow. His profession is one in which he gets people to take medications.

I just happened to get the elixir of "love".
Posted by BikeGuy at 9:49 AM 8 comments: