We've been friends for over 15 years.

When I met him, I told the man I was then seeing, "I've met the man I'm going to leave you for".  He didn't think it was as funny as I did. But on some level, I'm not sure I was truly kidding.

At the time, the man smoldered. Handsome as fuck. A jet black, perfectly groomed goatee to go along with his jet black thick hair.

He is still is handsome as fuck. But we've been friends. Good friends, but not super close, mostly because I think his husband dislikes me. Probably because he thinks I have the hots for his husband - which I did. Which I do.

So months and months ago, "Rob" made a leering comment on Facebook about one of my FB friends.  I chided back, "really? right in front of me??"  It was then the cloak - metaphorically speaking - came off. For both of us.

There was flirting - where there hadn't really been for 15 years. Then it was just overt comments/suggestion, and finally overt propositions, oddly enough, from him. As much as I wanted him, I did worry it would be awkward and ruin our friendship if we attempted and it didn't go well. He agreed, but we kept poking - again, metaphorically speaking.

He had me stop by his place of work. Everyone had gone. Deep down I knew we should have dove right in, but there was a lot of standing around, shifting foot to foot - talking, laughing uncomfortably, hemming and hawing until he finally called it and said "it's not going to happen today".  Duh. Deep down I knew that too. I went to break the ice. I went to get over an awkward phase, if we were going to do this at all.

Now and then, I'd ping him with a comment.  We'd kind of feel each other out - so to speak. While I knew Rob well, neither of us knew our likes / dislikes when it came to sex.  He knew I would volunteer at and attend CLAW. I knew he allegedly volunteered there too, but that was because an organization at which he donated time was a recipient of CLAW's donated funds. I didn't want to get him hung up on anything leather. He did say, "no butt stuff", since he's married.  I'm ok with that. He was unsure about kissing - as was I.

Kissing me to me, as previously stated here, is way more intimate than fucking or putting or taking DNA in an ass. It's a different form of intimacy and both of our feelings were conflicted as it stood.

One morning with a picture of my freshly shaven nuts. He replied almost immediately. He suggested getting together later in the day. I could sneak away from work early, as could he. I showed up at the agreed upon time, we opted to not talk to start, as to not fall into that earlier trap.

Upstairs we went. right to their master suite.  It's all very open concept - from the bed you can see the bathroom and shower. They're are no walls except for a partial one that blocks the toilet.  My hand went to his chest and traveled downward right onto this work pants. There was a lump, but not a LUMP.

Rob's hand went to my crotch as well. I was hard. Very.

This surprised me to a degree. I had the nerves too, but as you all know, my dick doesn't always respond to my mind. It might not have been this time either, which is why I was solid down there.

He undid my belt, unzipped my pants and took out my cock. He loved it. I knew he would. He went to his knees and fuck if he wasn't an excellent cocksucker.  I loved looking down at his handsome face and watching my cock disappear.

I should mention that we had discussed both of us wanting to suck the other. Normally it is not my thing, but he is not a normal guy in my life. I WANTED to please him in every way. I think it is why my cock was so hard.

Unbeknownst to me, I hadn't even known he had placed us in front of an enormous full length mirror that just leaned against a large post. Rob was an exhibitionist.  I loved it and told him so.  I placed my hand on his head and watched myself in the mirror push my cock into his mouth while tightly holding him in place. He took it like a champ.

Rob stood up and semi-spontaneously it happened.  We kissed. And fuck if he wasn't good at it. The kissing was full of passion and fire. I had hoped it would be. And I had hoped it wouldn't be. It would have left a layer of complexity out of the mix had we been bad at it.  We weren't.

We broke the kiss. Now it was my turn.

Me on my knees. Him watching in the mirror as I slapped his hand away from his belt. I was doing that. He apologized in advance for the size of his cock. He had one it before in texts, but I discounted those. No, he wasn't my size, but he had a great cock. I told him so, though I think he thinks I was just being nice.  He knows me well enough that I don't say things just to be nice. 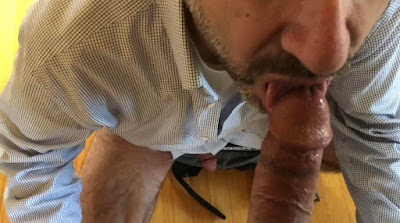 One of the problems with being friends first is that you possibly hold back on your sexual self - including the verbal.  I was pleasantly surprised when Rob told said, "yeah sucking my fucking cock".   It was like another barrier was taken down.

He moved his cock in and out of my mouth, telling me he liked seeing me drool over his dick.

I asked if this is what he really wanted. He said he did, but he didn't know for what he was asking. I had not shot for almost three weeks. When I blasted off, I went whole hog.  I hit his face, beard, forehead, and that shirt he wouldn't take off?  I'm guessing pre-soaking might help out, but it's probably a goner.

Oddly, the redressing and walk out wasn't weird. I think we had dodged a bullet on multiple levels, though he didn't miss my sperm bullets.

We have repeated versions of this a few times since, though not with a jacking off scenario.

I now find myself in a quandary.  Usually sex with friends doesn't end well, but mostly because of awkwardness,  This isn't that. My problem is no one is leaving anyone for anyone else. Maybe I think I want what I cannot have. The crush I had 15 years ago still exists........but now it's kicked up a notch.