Let’s just start off with: he was German.

Like just relocated from Germany, German. Born and raised there. Still sporting a heavy Germanic accent.

We had exchanged messages back and forth via Scruff, but neither of us was making the effort – I’m assuming we both assumed that the other would take the lead. Neither of us did. At one point, on one Saturday, things aligned and I was headed to his house.

5’10” or so. Shaved head. Salt & pepper goatee. Wifebeater. A band of ink going around the right bicep. And muscles.

However, he also sent me a pic of his dick and he had a really really nice schwantz. It was thick and 8 inches. Technically he was uncut, but I wouldn’t say he sported enough skin to make it look that much different than someone who was circumcised. 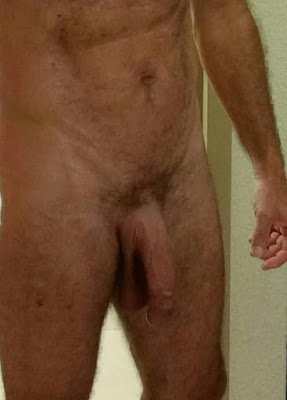 He liked showing off his dick, but when I’m planning on doing the sucking or taking it up the ass, I try not to advertise my dick. Personally, I think it sends a mixed message. It’s one thing if you discuss versatile status, but that wasn’t done. But now my mind was no longer on him giving me head. My thoughts were geared towards his penis.

He was in the yard, checking on stuff as I pulled up. In his heavy accent, he felt it was ironic that I drove up in a German made car. Coincidence, maybe. Ironic, no. I am of German descent – not that he would know that. I also knew he was waiting on a delivery from Home Depot, so we had an end-time, though he’d get warning when they were close to his house.

We weren’t in the house more than 30 seconds before we reached for each other. Being a hot day, shorts were dropped.  Mine were.  His, were not.  Not yet.

"Lutz” played with my cock, but just with his hands, no mouth. First I was standing, and then I was sitting. He had pure white sofas and chairs. For naked cracks to hit that, while stimulating a potential leaking organ seemed brave, if not downright stupid. But his house – he knows the score…..I assume.

His hands slipped down to my sac. There he touched lightly. Touched roughly. Tugged them while watching my face. I gave no indication that I wasn’t liking any of it. His hand slipped under my nuts to rub on my taint. I scooted a little forward to edge of the sofa and soon his fingers were running over my hole.

Then he slid one up me.

Normally I’m not a fan of fingers. I don’t know why exactly, but they’ve never been horribly comfortable for me. Even for loosening up a hole, I’d rather a guy just do it with his cock. Personally, I think they’re too boney.

But up my bum his middle finger went. And it felt fantastic.  Even I could feel how my membrane grasped around his digit. I can only imagine what he was experiencing.

He was having me get a little short of breath, as he manipulated that finger around. The man knew what he was doing – clearly. I was quickly changing my mind about fingers. He looked me right in the eye as he moved that ‘fuck you’ finger in my ass.

At this point he slipped down his shorts, teasing me with the pubes, the base of the shaft and then slowly but surely the rest of it. They hit the floor and were kicked to the side. The wonderful sausage was in full view.  I slipped off the sofa and wrapped my lips around it – it felt great in my mouth. Going by his moans, he had the same opinion.

He leaked a lot. I lapped up a lot too. It was a good pairing. At this point, he hadn’t tried to suck my dick – though that was the intent of his invite. I was ok with that.

He got a call he had to take and he stepped back. I got back on the sofa. When he returned, his finger found my hole. And then a second finger joined. It was fucking great. I don’t know how, but it was. Then he did something with his fingers that just made me moan with pleasure. I think he curled his fingers or twisted his wrist – or both. But fuck he knew what to do.

Looking at the pleasure on my face, he either enjoyed me getting off on this, or possibly my ass was doing something to his hand that I could not comprehend.

Before long, he stepped up behind me. Slapping his cock against my crack and hole seemed natural to me. But since he never mentioned fucking me, him pushing a big cock against a small opening. Yet that pink round entrance opened up for him and he insistently pushed his way in. I did nothing to stop his invasion. I needed it. I wanted it to happen.

Halfway through the fuck, his phone rang. By the time he got to it, after a few more pumps up my ass he pulled out but he missed the call. He tried calling Home Depot back, only to find obstacles. While he dealt with those, I wrapped my mouth around the cock that was just up my hole. His cock stayed hard the entire time.

While he was on hold for a long time, he signaled me back to the sofa. I went ass up and he went balls deep. With a few more minutes on hold, he pumped my butt. With no notice, he also pumped a load up my ass.  He put one hand on the small of my back at the time of ejaculation. I milked his cock with my ass and each time I'd clamp, I'd feel him twitch.

Somewhere during his withdraw, his call got dropped. He was not happy.

I was, so while he redialed, I took his cock back into my mouth - and he didn't stop me. He wasn't so sensitive to the touch that he recoiled. After a few minutes, I had him back at rock hard. And he was clean as a whistle. But I didn't stop. I didn't want to and he made no signs telling me to cease and desist. So I didn't.

15 minutes later I was rewarded with a second load. In my mouth. One for each end.

I figured that was it for me. He had been on and off hold with various managers while I sucked him. Still no delivery resolution. But while he traversed the bowels of Home Depots customer service, he got on the ground, on his back and told me to jack off on him.

I can only hope he got completely cleaned up before Home Depot delivery guys smelled the drying semen on his body. Or maybe he wanted them to.
Posted by BikeGuy at 7:37 PM 4 comments: