He was hounding me for a meet-up.  Sometimes I'm better about responding than others. He can be relentless in his quest - which can be a testament in certain ways, but an annoyance in others.

He wants this and that.  To fuck certain places at the house, if possible. I'm not willing to let him invade some parts of the living space, but I've given in here and there. He was hoping for two fucks - two loads into me. I didn't say no, but I didn't say yes.  Mostly because I know him well enough - as soon as he comes, he disengages on multiple levels.

We kissed. We tried to make that happen, but there was a disconnect with him it seemed. It was happening but it didn't feel genuine. Maybe we were playing the part(s).

I sucked his cock. I think I did a good job. But I think sucking cock is one of my great skills.

He always likes me to eat his ass - and I think I've made it clear here that I love to eat a guy's hole. I can really get into it. I know some guys won't do it because they think it is disgusting, but fuck if they don't like having it done to them.

I like doing it - for just doing it, but the reaction I usually get.  I like having it done because it is usually a prelude to having a shaft slid up my ass.

This guy, I think, wanted my shaft up his.  I tried.  He's one of the few who make me rock hard and I got about half in him when he claimed I was "too big".  Personally, I think he could have taken it.  I'm thick, I'm kind of big, but I don't think I fit into the "too big" category.

So it was on to me eating his hole again. At some point I felt like a crazed ass-eater and it probably didn't help that he called me a 'nasty pig'.  I took it as a compliment.

Before long, I was on my side, him behind me. It's how he wanted to fuck that day.  He slid into me. Fuck if it didn't feel great. It did. It fucking did.

I'm not sure how long the fuck went on for, but longer than it normally does. He paced himself and I was grateful for it. I like him being in me, fucking me, flexing his rod and making me feel it.

He announced he was close. I guess I could have told him to slow down or stop until he cooled off, but I told him to go for it!  He did.  And he unloaded up my ass.

I like guys who will stay up my ass after they shoot. Even for only a minute.  This is not that guy. He wants out almost immediately, even if I ask or plead a little.

But true to my prediction, he was up and off the bed, and clothes on quicker than shit. There'd never be a second load. Ever. Not in the same session.

As persistent as he was to get me to drop my pants, just as quickly he couldn't wait to get out - barely making eye or verbal contact.

But I know the score with him. I don't go into that situation blindly.  He had a need and so did I.  We got what we wanted and what we expected.
Posted by BikeGuy at 6:36 PM 1 comment:

I would say about three or four years ago I agreed to pose for a photographer  - a legitimate one.  He provided me a few of the images he took - and he took close to a hundred.

He was using a few for his portfolio to get new clients.  From what I remember, he only used two for himself. One I liked, one was just ok.

The shoot was real.  He had an assistant and nothing else happened.  It was just pictures.

The idea came up later that he'd like to do a shoot of suits as bondage.  Neck ties binding the hands, shit like that. I think it's all been done before, but I was up for it. Nothing ever came of it.

Flash forward a few years later and the guy is on-line and pings me.  Do I want to meet for coffee?  Um. No, I reply, but I do like 'cream'.   I'm invited over.

We're just talking and showing off and he asks me how I like to play. I say I'm open.  He likes that and we head to the basement where he took my photos all those years ago.  Going into a closet, he comes out with bags.  Bags full of restraints, of chains, of wrist protectors, cuffs, paddles, etc.

Apparently this is how he likes to play.

We don't discuss limits. We don't discuss safe words. He takes my left hand and wraps a wrist restraint around it. He threads the chain and hooks it to the ceiling. He continues the process with the right wrist.  Then it is onto the the left and right ankles to a board he has laid on the floor.

He smacks my abs. First lightly, testing my reaction. Then harder.  I don't say 'no'. He notices this.

Soon, out comes the ear protection. They truly cut off all sound. I see his lips move yet I hear nothing. He was hoping for such. Then comes the blindfold.  It is now dark.

This is how he plays.

My cock responds. He ties rope around it and secures one end to the board my legs are chained to. The cock still responds.

There is a paddle on my ass. Swats, 6-8 times. I lose count.  There is a light cat o'nine tails that hits my back, my chest, my legs.

There is nothing.  For minutes. Is it playful anticipation?  Has he left?  Is he just standing admiring? I have no idea and no way to find out. I remain suspended.

I concentrate on not shooting.  I have a strong will this way. He stops.

Soon he's behind me. My tits are being played with and I can feel his cock at my crack. We did not discuss, not that we have to. I wasn't prepped, but that's his problem, but it isn't as he never follows through. He's just letting me know he could if he wanted.  I know. I know.

Soon my chains are being loosened, but not removed.  I'm moved and on my back on the carpet. The chains on my wrists are being reattached to something floor level but above my head.

He backs up but still on my chest. He is moving. He's jacking. This I know. He shoots - gobs and gobs of semen. It hits my cheek, my nose, my forehead but mostly into my beard.  I open my mouth but catch very little, which I believe was his intent - me not getting it.

The blindfold is removed and the ear things. He has a camera and is taking pics of his load on my face.

The camera was not there before. This I know. Was that the period of time he may have been gone or silent?  He's smiling, almost laughing.

He laughs. He throws a towel my way I can't possible reach with my hands the way they are. He frees me and I clean up, refusing his offer for a shower.  This is how I will leave.

Before leaving, he asks if I will pose for some images he will offer at CLAW - a leather event. Nothing too too graphic. No hard cocks. Just leather and hints of lust. I agree.

Two days later, this and three other images appear in my email.  The tinting and coloring are mine. The picture is all his. 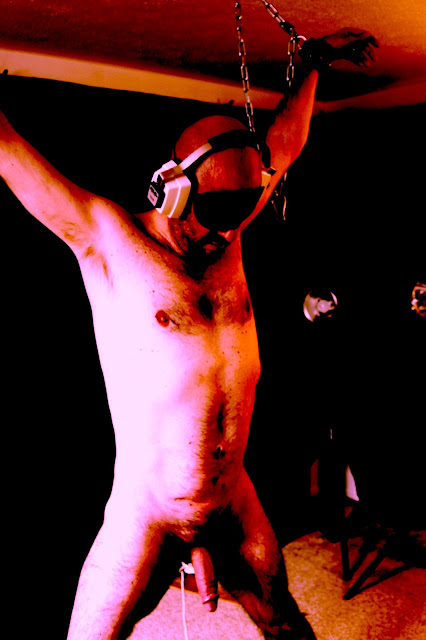 It has been a while.  I thought maybe the last encounter months ago scared him off.  I could see why it might. I hadn't even heard from him.  Guilt had gotten the best of him, I assumed.

Possibly not, as he contacted me again wanting to stop over. He didn't say for what.  This time, I'm assuming he was leaving things a bit more open as opposed to me just going down and sucking his cock off.  In my mind, sucking was less appealing than what we had done last time.

As it turns out, the appointed time got interrupted with me on an extended conference call.  It was to have finished well before he arrived, but I was still on it.  He sat patiently for me, as I listened and talked.  He rubbed his crotch, I did the same to mine.

Eventually, I pulled my cock out and it was getting hard.  He went down on it.

I know this is not my norm, but it was a good indicator of what went on last time, minus the work call. It got to the point I dropped my pants.  Like last time, his tongue and mouth went lower. Under. Behind.  And in.

Sure, he'd go back to my cock, but more often than not, we went back to my hole. His one visible eye looking up at me - to see if he was getting a reaction. He was, albeit maybe a slightly exaggerated one.  He was enthusiastic, but not exceptionally skilled.

I eventually got off the call and we could be more verbal.  I'd hold his mouth down under my nuts and he knew what to do. But eventually he sat in the other chair and goes, "my turn".

While the man is very average looking (at best), his cock his 7", curved, thick and had a good sized head on it. I do like sucking it. I've done it about a half dozen times now.

Like last time, without words, he attempted to ease into me from a kneeling position while I was at the edge of the chair.  Unlike last time, the angle was all off for one, or both, of us and it didn't work.  He requested I get on my back on the desk.

This guy needed lube. Spit wasn't going to do it for him.

Like I said, he had a big head on this cock and you could truly feel it pushing into my hole. I'm sure my eyes widened and he saw that and hesitated for a moment before continuing.  But with a nod of my head, silently affirming I wanted more, he was all to happy to continue insertion.  Slow and steady till he bottomed out.  I sighed.

He's a man with little finesse.  I'm guessing this is how is wife gets fucked.....or used to when she probably put out.  I'm all for a selfish guy in bed, but he still should be good at what he does. But he was feeling good, I assume.  He liked my ass.

It's not like he was horrible at fucking, but his need was one-sided, but you have to expect that as a bottom most of the time.  I'm good with that - sometimes I am GREAT with that.

The fuck was not a long one - less than 10 minutes.  But if you've been in the position I was in, on my back, looking into the face of a fucker, you know the look.  Some are amateurs at hiding their state - they'd probably be good to play poker against.  But I knew where he was in the process. He knew too, obviously.

That's all it takes.  Blast off.

He slips into his pants and leaves.  It will be months before I hear from him again. If ever.
Posted by BikeGuy at 9:27 AM 2 comments: