Sucked in the Bar

Not quite from the archives, but from an encounter back in December 2010.

It was a response to a CL ad.

He wanted to play. I wanted to play. He was going to be in town for two days on business, at a hotel but couldn't host - which I never quite understand. Do people really share rooms with co-workers? I don't.

With no place to play, we made arrangements to try to meet up in a public restroom. I love that shit, but know the set-ups around town and they are quite unforgiving when it comes to even pseudo-privacy. I'm all for public play, just not for public getting busted.

As we got closer to the time, he went radio-silent. I hate that.

If you've been to one of these places, they are hardly leathery at this time of day. Normally it's just the somewhat alcoholic crowd who starts drinking at 4p...or earlier. It used to be sadder when they allowed smoking there, but no longer.

Meeting him there at 5:30p wasn't so bad, even though I was in work clothes. No one was in leather. ...except maybe for their belts and shoes. We spied each other, I ordered a beer and he came over to talk. The three others in the bar were all eyes and ears as they were intrigued by my presence. I am not saying that because I'm full of myself - just that I was someone new and they knew something was up.

I told 'my guy' I was going to check out the other room, which had a pool table. Only the entrance separated the bar and the pool room - it was not a big place. He followed to 'talk' to me.

Talking consisted of me grabbing his crotch. He was stiff. He grabbed mine. I was stiff.

Even though I opened his pants and went down on him right there, deep down, I knew how it was going to turn out. There we were, standing in an open room with me on my knees, but it was he who wanted to be on his. Why do I always get caught in these situations?

But while I knew I wasn't getting my way, I refused to just leave that easily. So I let him suck me. He did a good job. I was kind of hoping someone would walk in and at least watch. One of the guys in the bar looked ok. The others - not so much.

This went on for a good 15 minutes until I basically willed myself to blow my load. Sometimes you just have to get there mentally to finish it off.

He was a trooper and took every drop. He then tucked himself back in and zipped up. While he went to use the restroom, I just took off - into the night (or late afternoon) without a word.

He texted me a few hours later. Apparently all his drinking buds found what we did to be hot. Someone did watch - and reported back.

Hope they had a good show.
Posted by BikeGuy at 8:01 PM 4 comments:

I'm woefully behind on posting......but I do have stories to tell, some good, some fair, some bad.

This one is good. At least in my mind. It is a GRINDR hook-up, while I was on the road.

He was staying well, about 1700 feet away from me in a neighboring hotel. We chatted on and off over the course of a day. Eventually the stars aligned and I got in my rental car and drove over. Yeah, 1700 feet isn't that far, but it was subzero temps and one had to cross train tracks and a river. It was 1700 as the crow flies, not as the department of transportation and city planning mapped out their roads.

Oh, and he was cute. Normally I am way more discreet than this, but..... 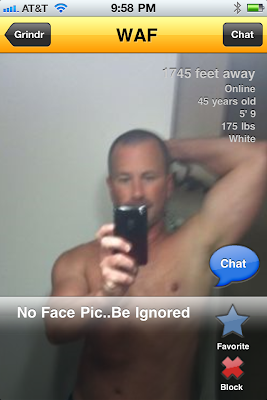 I knocked on his door and he opened. He was way more attractive than his picture indicates - and carried himself as such.

The room was dark, illuminated by only two things: his television playing the State of the Union address (yeah, I sad I was late in posting) and on his laptop, a Treasure Island Media video. I liked the dichotomy of the set-up.

I felt a little creeped out by going to my knees and taking in his 8+ inches while John Boehner looked on. Joe Biden, I could get by with, but Boehner? Nahhh. Not that it stopped me.

I went down, and then I went down.......right to his fucking short hairs. He sat in his hotel desk chair, his head tilted back while I did my best. And if I say so myself, I did do a great job.

Up and down I went. Shallow and deep. As always, I mixed up how I used my mouth, tongue and lips the achieve the effect that would get the best responses out of the feeder. He did not disappoint.

Not only moans, but his own discussion about his big dick. I love when a man loves his own cock and is not only proud of it, but crows about it too. And he did. Telling me to take it. Telling me to make it feel good. Telling me how I was going to swallow every drop. He seemed like a man of authority, while being nice about it.

Maybe just a little too nice. When he got to that point, he asked if I was going to take it. I never want a guy to ask, I just want him to do it. I think that is what cocksuckers are for. I think if you're inviting a guy over to your hotel, that is what the feeder should expect - and not ask the eater permission.

I was happy to milk what I could from him and he didn't detract me. He was not so sensitive after the fact that he would push me away - not like some. Hell, I'm like that.

He thanked me while I zipped up my coat. He pulled on his shorts and showed me to his hotel room door. By the time I got back to my hotel, he had texted me a message thanking me for the 'awesome head'.

Buddy - it was my pleasure!
Posted by BikeGuy at 11:01 AM No comments: