He's was a surfer type from Orange County. I met him in Las Vegas. There he was on Grindr and Scruff - but clearly so was I, if I knew that info.

'Top' was in his screen name, so I knew what he was about....but even with that you can never be sure. I was intrigued by his pic or I never would have let the exchange go on as long as it did. He was just down the road from me and I wanted him to put up or shut up. I'm 90% sure he was searching for something 'better'. We, as a gender, always are.

I said he had a nice cock for sucking. he replied "I want to fuck". To the point!

5'8", he said. Maybe. Possibly a little shorter. 180, he said. Probably close to the truth. Muscular, he said. He had the potential or once was. He had traces of it, surely, but he wasn't exactly as his pictures said. 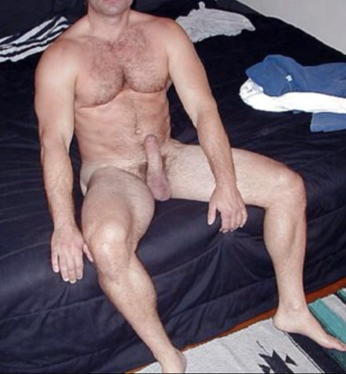 Still he was hot and self-assured.

Answering the door to his top floor Mandalay Bay room, he was shirtless and just out of the shower. Still he had grey gym shorts on.

Being a guy from Southern Cali, he had the look. His pic didn't indicate it, but he had long blonde hair tied back into a wet ponytail. With his exposure to surf and sun, his skin looked older than 43 years, by at least a decade older. Still very masculine.

I walked in and he grabs my head and kisses me. He parts my lips so his tongue can go deep. He plays with my nipples through my shirt and of course that gets me worked up.

I dropped to my knees and took his cock into my mouth. Mind you, it was still covered by his gym shorts, but I took it to the root. It was a great sight and great sensation for us both. I think it also showed him my commitment. This also elicited the first of many "Duuuuuuude" from him. C'mon, he is from SoCal.

I looked up at him as I pulled down his shorts and tell him 'thank' for not beating around the bush about what he wanted. "I'm not retarded", he replied. But as we know, so many guys are not up front about what they want. His response was great.

I do go and suck his thick dick for a while. Not a long time, as I don't want to get him close - not this way. Nor do I want to lose his interest as he did make it clear he wanted to put pole to hole.

We went over to his king bed and he guided me down on my back at the end. Pushing my legs over my head, he bent down and ate my ass. Normally, I love my ass eaten, and it was ok, but I was thinking it would be more than that. I'm not complaining.

He stood over me and walked around the side so I could get his cock wet. Without warning he bent over and 69'd me. There was never a discussion about touching, let alone sucking, my dick. He did a great job. Good enough that I had to pull him off so I would not get over-excited. This man had me OVER excited.

Since he ate my ass, I asked if would sit on my face. He asked 'why'? He was going to make me say it, as opposed to just doing it. I said it: "I want to eat your hole". He sat on my face.

Since he was just out of the shower, he was clean as a whistle down there. If he liked it, he gave no indication. Maybe he wasn't much into that activity - but normally I get a very good response. I sucked his cock for good measure as it was seemingly the only lubrication that I would be getting.

I was not incorrect.

With another gob of spit on my hole, he lined up his thick penis and pushed in like a pro. It slipped in with very little resistance, but I had one hit of poppers and was breathing steadily to take the invasion. In a minute or two he bottomed out. "DUDE!"

Then the fucking began.

With my knees close to my chest, he had full exposure to my asshole. He used it - that advantage and that hole. Deep strokes. Short strokes. Slow and fast. He'd flex that shaft - or not. He'd do nice even fucking and then jack rabbit like effect.

When he wasn't starting a sentence with 'DUDE!', he'd follow it up with 'I feel so fucking good'. When he'd say 'I' he meant him, not that I made him feel good. He was so into himself that way - if one were less of a man they might take offense to his self-centeredness. As it turns out, it was hot.

He made no apologies when he said what he wanted - what would please him, what would get him off. Why should this be different? He was in this for his pleasure, not to give it.

But he was giving it. Mental and physical. I was very much into it whether it was intended or not. I was full, it felt great - though I knew I'd be a little sore later, and I didn't care.

"DUDE!!! - I am so close". He'd hold back and a few minutes later he'd repeat that line. Then we went two or three more rounds of the same thing. It was still hot.

By the time he was building up that last edge (and over) he started asking me if I wanted the load. Over and over he would ask. Making me ask for it, on the verge of begging for it.

Maybe that is what he wanted. Maybe he wanted absolution for what he was about to do - putting a steaming load of sperm up my ass.

I asked. I pleaded. I received.

He popped up my ass where I could feel the throbs, if not the jets. He kept moaning and moaning, I knew he continued to shoot. Beautiful.

Personally, I thought he'd be spent and done with me.

As he kept his still hard cock up me, he started stroking my hard cock. You know me - I didn't care about shooting my load but he did. He wouldn't let up. And I was still excited and erect.

With amazing grace, he flipped me and moved me, so as not to leak any of his semen onto his 600 count sheets. There were no worries, my ass was clamped and I was keeping that load in.

He jumped in the shower, I started to dress. He showed me to the door when he was done and offered me a towel. I did the cursory wipe of my face, and while others couldn't see the mark, I knew it was there. And I knew it all day long at work.
Posted by BikeGuy at 6:22 PM 1 comment: