After I left the warehouse, I ventured east by about 30 blocks to a park of which I knew – or at least of which I've heard. I had stopped by once or twice and it was sketchy at best. But I had gotten some vague intel from someone who ventures there and I thought, what the fuck. Why not?
The park is heavily – and I mean like 95/5 – minority visited. I assume if a white boy like me is there, they know why I’m there. And they would not be wrong.
The park itself is about 180 degrees. A half moon shaped place. A road that doesn’t go fully around, so a lot of thee point turns goes on here.  It has a ball diamond or two, and some very abandoned tennis courts. My intel told me this is where the action takes place. Park – walk back to the tennis courts. It’s probably better at night, but this was only 5p.
There were few cars, but I don’t know the normal activity. I sat for a few, assessed the area and then got out and took a little walk back to the courts. One is truly abandoned, with things in the fenced in area, strewn there. 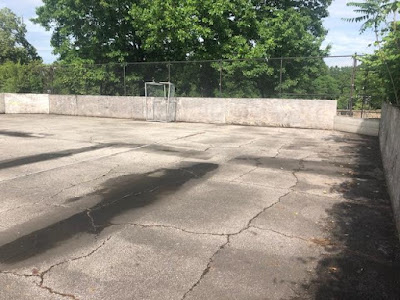 One heavyset white guy was roaming back there, but moved along. So it was just me. But shortly, a very thicc (yes, I spelled it that way) black guy got out of his SUV and started wandering over my way too. He was at least 6’, probably 200+lbs with the tightest, most fitted jeans I’d ever seen. So tight you’d never see a box on him. It would have trapped and pressed anything down.  Still, the form fitting clothing was hot. He was antsy and it showed. I was not and think I was being quite cool. He finally got me to follow him to a farther side that seemed empty but was not.
He was quiet. Not a word. Not quite touching his crotch but close. My radar pricked up hoping this wasn’t entrapment. I finally spoke up. “You a cop?”. The answer was no. And then the pulled out his cock.
It was nice and it wasn’t hard yet. Dark as night shaft with a pink head and foreskin. Honestly, I don’t see a lot of uncut black cocks. It was nice to hold, and started really firming up. Enough skin that it went back and forth nicely. I told him I’d love to sit on the bench and have him stand in front of me and feed me. He disappointed me by saying he wasn’t into oral, but I hoped that meant he wanted to fuck. Unfortunately, he quickly followed up with he was only looking to jack off with someone. Bummer.
While I was ok watching that thick 7.5”, and the man working it, I wanted more. So verbal was the answer to exploration.  “I bet you’d be ok with jacking while you watched me suck someone else off”. His reply was great, “fuck yeah I would”. I said I’d suck off anyone if he wanted to watch.
Almost on cue another black male wandered to the farther side of the same court. Far enough away I couldn’t make out a face, body type etc. The guy next to me said, "let me go check it out" and for me to wait. After leaving by a few yards, he turned and told me to follow. He must have seen enough.
Sure enough, we get to the other end and the new guy has no pants on at all and stroked his 7”. The first guy must have seen that and taken it as a sign it was ok.
As it turns out, this new guy wasn’t new at all to me. He’s fucked me in the past. A number of times. That said, we were both smart enough not to really say a thing. We acknowledged it with our eyes. I dropped to my knees to blow him, though we both knew this is not how it would end. Only guy #1 thought this would end with head – maybe. While down there, I unbuckled my pants and belt.
Soon enough I stood up and let my pants fall to my ankles. “Let me see that hairy ass” came from the guy I knew. Of course I showed it to him. More surprisingly, guy #1 takes a tube of lube out of his already tight pants and squirts it on #2’s dick. I take a long hit of poppers and then I’m taking half the dick in my ass. He holds still for a second hit and then it’s buried to hilt.
I loved how #1 was complicit in this fuck.
I am facing outward able to see anyone who might approach, as no one can truly approach from behind us. They’re busy looking at black cock going in and out of my ass. They're talking - most likely about me - but I cannot hear what they're saying. I don't really care, as it really doesn't matter.
The dick felt good.
I was pivoted so guy #1 was in front of me. And as much as I wanted to be spit roasted, it wasn't on the docket for me. He still wouldn't let me suck his dick and he stayed just out of reach. But he was pounding away.
He was trying to time his ejaculation with the guy fucking my ass, but he couldn't hold back. "I can't hold it", escaped from his lips.  I told him to cum in my face, and he stepped up and shot. Gobs. 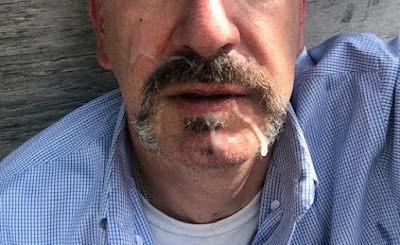 What didn't land on my face, or open mouth (yes, some got in my mouth directly!) or shirt went on his hands. I don't think he would have fed me the spooge hanging off his fingers had I not asked. But I did....and he did. I cleaned off those fingers.
The guy behind me by this time was shooting up my ass.  Double teamed.
Both guys got themselves together well before I did. I was sitting butt to the ground while they walked away. I stuck around for a bit to see if anyone else wandered back to the courts, but it was not meant to be.
I pulled up my pants, made sure any other facials shots were ingested and headed to my car.
I'm sure I'll be back.
Posted by BikeGuy at 9:34 AM

Hot as always! thanks for sharing. Glad your back in action. I really get off on your adventures!

Hee hee. Park cruising is the best. Loved it. But have pretty much given it up. Too dangerous these days. I don't trust. But good for you. Thanks for sharing your adventure. Super hot.