The week before, I was there just to cruise. A guy came to my car and asked me to follow him. So I did. He went back into that abandoned tennis court and before I could get in there, his formidable cock was already out. Curved. Thick. Good sized.  I went to my knees and gave it my all.

The cock was ripe, but that did not detract me. Yet my skill and enthusiasm wasn't enough. After about 10 minutes, he pulled back, zipped up and walked away.  Damn.

So this time, I wasn't there for anything other than kicking back on a beautiful day with what would turn out to be a fair cigar at best.  About halfway through, a guy got out of his car and walked towards the tennis courts, where I was.

As he approached, he looked so promising.  Tall. Dark as night. Good body - tight white t-shirt on, baggy blue jeans, though not hanging off him, and mirrored sunglasses.

Between where I was standing and the court was a stone wall about thigh high - at least on a 6'2" guy it is. He was on one side of the wall, I on the other. He eyed me up and down (I think). It was hard to tell in mirrored sunglasses. I did the same, only more obvious, with my eyes purposefully coming to rest on his crotch.

After a long minute, he started walked back to his car.  Fuck.  No luck.

But me, being me, followed him with my eyes and squatted down. Should he turn back, he'd see me in sucking position. When he got to his car, he looked back, shut his car door without ever getting into it and started the trek back.  I stayed put.

This time, he wasn't on the other side of the wall. He stood next to me and the tree I was against.

No words from either of us. It was a risk about not asking if he was a cop, but I reached for his crotch and felt his hardening dick. He took over, unzipped and pulled it out.  It was beautiful:  dark, like him, thick and veiny. I'd guessing 7.5".

He positioned himself just so. As we took no true cover there, people on the freeway and off ramp, in theory could see. I'm not sure how much at 70 mph, but if stuck on the ramp, could definitely see a man in a white shirt from the back. Possibly seeing a white guy squatting in front of him.

I wasn't deterred.  I went right to work. He let me. No words. Not sounds other than the din of traffic. He was facing in such a way he'd see anyone heading our way.

At first our rhythm was off. My going down and his pushing in was not in sync. I fixed that problem. His hands were contently in his pockets. Without taking my mouth off his cock, I took one of his hands and guided it to the back of my head. It was then I saw the diamond encrusted wedding band.  Married to boot.  Nice.

It's not that I wasn't a utility before this head/hand grasp, but it was without a doubt at this point. He was single focused and me, as a person, wasn't even part of the equation. As you've figured out well before this post, I'm fine with that.

I was more surprised how soon after he took that lead role that he came. I wasn't expecting it. Still no words and his dick didn't seem to get harder as he got closer. None of the tell tale signs were there. But then came the roar.

It was loud, but not so loud that vehicles on the off-ramp could hear should their windows be down. It wasn't the biggest or tastiest load I've had - not by far. His sounds made the orgasm seem larger than it was, but I think we all know the physical outward can be different than the internal feeling.

Where I would have liked to make sure I got all drops, he pulled out and away and actually wiped his big black cock on the tree bark next to me.  Don't think I didn't look or notice either....... 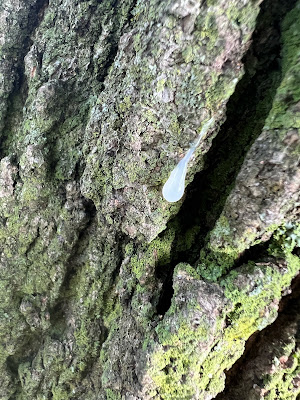 He did not leave a lot of residual sperm, but he left it. And well, you know I couldn't abide by that.  At all.

I took care of it.

I also know he was watching this before he got into his car.  I'm sure he was just thinking, "fucking faggot!".

I'm good with that.

So risky and so fun... good for you. Nice thing about marrieds... they never kiss and tell.